I just saw this at home eating a chicken

That comment was on a screenshot of a Facebook page sent to the website Inexplicata, which reports on paranormal news from Spain, South America and the Caribbean. It indicates that the photo was taken on December 25, 2016 at 10:31 p.m., in the Villodas sector of Guayama, Puerto Rico. The seemingly large, shadowy creature is in front of a clothing-laden clothesline. 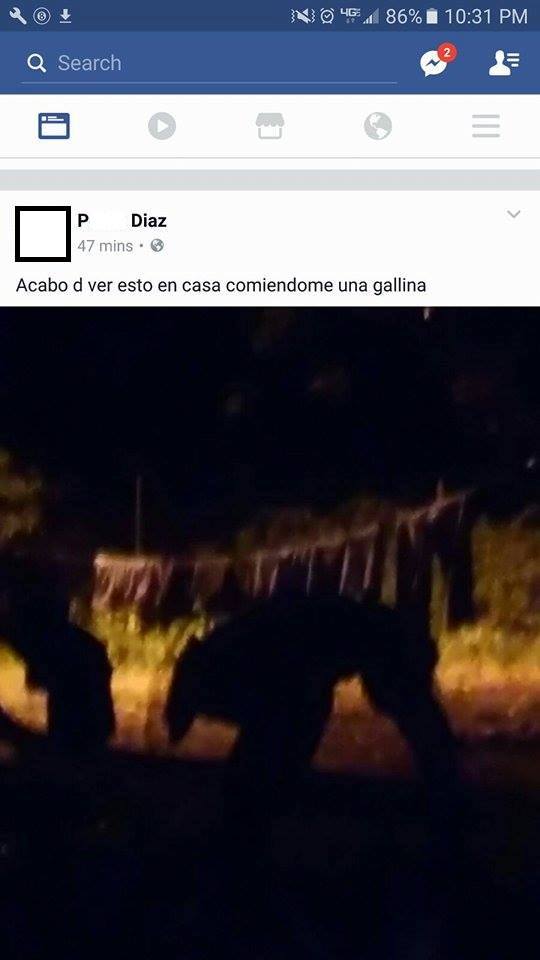 That’s not much to go on … except for the fact that Guayama was the location of numerous reported cow and horse mutilations in 2013 (also reported by Inexplicata) and the sighting of another alleged chupacabra described as “a dark figure resembling a short-statured man” with a single, glowing-red eye, “a yellowish or bright orange color” with “something strange on its head and back, resembling quills.” That description sounds like the classic Puerto Rican chupacabra. Unfortunately, no photos appear to have been taken of this or other sightings in Guyama nor of the mutilated livestock.

The sighting in El Paso was more of a classic Texas chupacabra sighting. Local NBC affiliate NewsChannel 9 posted a video on January 10th of a strange creature said to be roaming in Kern Place, an El Paso suburb and referred to it as a possible chupacabra. It also stated that there had been a number of missing pets reported in this neighborhood near the El Paso Tennis Club since November. And finally – as a hint for those who hadn’t come to the same conclusion as most viewers of the video – it mentioned that there had been a number of coyote sightings as well. Other more skeptical media sites pointed out that the poor animal looks suspiciously like a coyote suffering from mange and Texas Parks and Wildlife recommended anyone seeing it to stay away and call them for help.

Were the “reporters” at NewsChannel 9 too quick to allege this might be a video of a chupacabra sighting? Is a single dark photo of a shadowy beast in an area known for strange creature sightings better evidence?

The hunt for a chupacabra continues.