Prehistoric Alien-Looking Bug Unlike Any Known Life on Earth

Among the alternative theories for how life began on Earth, one of the more popular ones is the theory of Panspermia - that life came to Earth from the vast reaches of space on a meteorite or asteroid. Sometimes this theory includes ancient astronauts deliberately seeding life on Earth by introducing organisms to our planet, and other times it involves microorganisms hitching a ride on space rocks which impacted our planet. While concrete evidence for these theories is hard to come by, the discovery of an ancient, mysterious insect by Oregon State University biologists has scientific community scratching their heads in wonder about where such an organism came from. Could it have been space? I hope it’s space. Let’s go with space.

Similar to the feathered dinosaur tail found in 2016, the 100-million-year-old insect was found encased in a piece of Burmese amber. The insect’s strange, bug-eyed (literally) appearance has led many biologists to call it “alien-like,” and its physiology is unique enough to warrant the creation of an entire new taxonomic order. In an OSU press release, professor of entomology and amber specimen expert George Poinar, Jr. said that the insect is unlike any other known insects or organisms on Earth:

This insect has a number of features that just don’t match those of any other insect species that I know. I had never really seen anything like it. The strangest thing about this insect is that the head looked so much like the way aliens are often portrayed. With its long neck, big eyes and strange oblong head, I thought it resembled E.T.

The insect’s triangular head is unique in that the vertex lies at the base of its neck, rather than at the front of its head. That could have allowed the insect to turn its head almost 180 degrees for true stereoscopic vision. 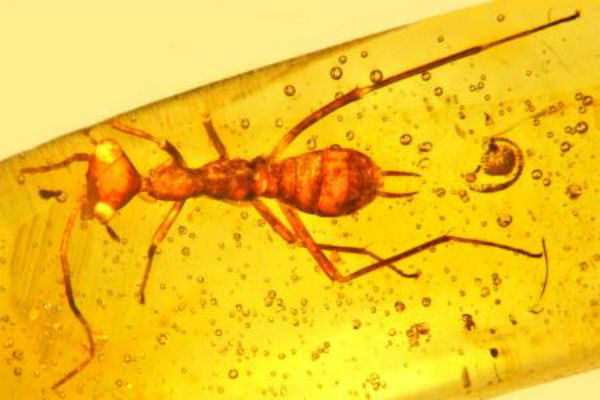 The bizarre bug also sports a pair of glands on its neck that researchers believe could have been used to spray defensive toxins. The insect has been named Aethiocarenus burmanicus, and a full report of its classification and physiology has been published in the journal Cretaceous Research.