A small community in rural North Dakota experienced a very odd visitor this past Christmas. Apparently, the holiday cheer in Dickey County attracted a fabled being in the same tier as Santa Claus: Bigfoot. The only difference? Bigfoot may actually be real. And one man has a compelling story to support it.

On the evening of December 25th, 2016 an Ellendale, ND woman witnessed a “huge, hairy, ugly monster” through her kitchen window. Startled, she called her family friend Christopher Bauer, an experienced woodsman, to investigate. Bauer arrived on the scene and discovered 18” long, 8” wide footprints that left “deep impressions” in the snowy ground. The separation of the prints indicated an amazing 4’ long stride. Even more amazing? The trackway spanned an incredible 7 miles through the rural farmland. Bauer followed hundreds of prints leading across a distant highway until they eventually faded up into nearby hills. The seasoned tracker was, of course, exhilarated by the discovery:

"It's a bigfoot, sasquatch, gigantopithecus, whatever you want to call him. He's a real animal, he's here and I want people to know."

Is North Dakota actually a Bigfoot hotspot? WDAY, the news station responsible for the original broadcast, news article, and field interview with Bauer, conveyed a skeptical tone throughout their coverage. The station seemed skeptical not exactly by the idea of a Sasquatch, but that one of them was actually seen in North Dakota. Is that assumption valid? Is North Dakota not a true Bigfoot hotspot like Washington or California? The answer, simply, is no. Not at all.

The Bigfoot Field Researchers Organization (BFRO) reports a mere 6 encounters total. Comparatively, the state of Washington charts 623 encounters (the most of any state). Even Connecticut, the smallest state besides Hawaii, received 12 encounter reports over the years. So, what’s the deal with North Dakota? 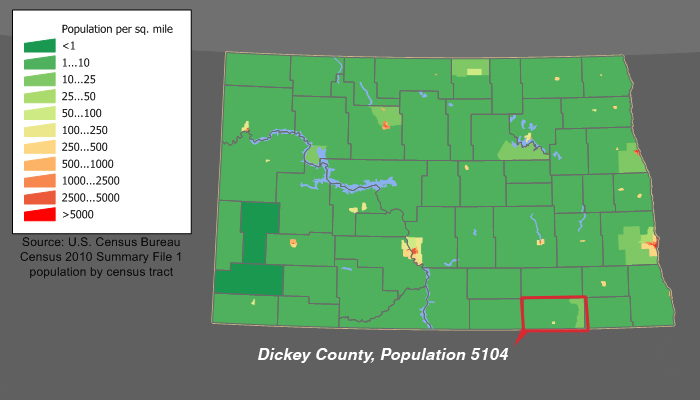 North Dakota is the fourth-least densely populated state in the entire country. Additionally, Dickey County lays on the border to South Dakota, the fifth-least densely populated state. Dickey County itself only has 4.7 people per square mile. Translation: even though the large landmass, access to water, available shelter, and abundant food supply provide the perfect environment for a creature the size of Sasquatch, there’s just no one there to see them. Even more granular, if you consider the idea that the North American Sasquatch population size is somewhere between 842 and 11,919 (the range of minimum viable species), then we truly have a needle in a haystack the size of North Dakota.

It is actually amazing that, not only did this man track seven miles worth of massive footprints, but his neighbor saw the creature’s face in her window as well. That is, if the sighting was genuine.

Despite the fantastic details of this story, certain questions must be asked. What specifically did that creature in the window look like? Was the trackway fluid and unbroken throughout? How did he determine the creature reached down to pick up “a mouse or a vole or something like that?” And, perhaps most importantly, did the tracks really just fade into the hills? Or did they end on the highway? Unfortunately, until physical evidence surfaces, we must assume the “Bigfoot” in question walked seven miles across snowy farmland to the highway, got in his car, and drove away.

But if you ask Bauer, Sasquatch is alive and well in North Dakota: “The truth is out there. It’s there. I know he is. I tracked him.”

Quotes and story originally reported by the Grand Forks Herald