Source of Weird Space Signals is Found in a Weird Place

Astronomer Shriharsh Tendulkar said in a recent presentation that astronomers searching for the sources of FRBs  – fast radio bursts – have been looking where they think they should be coming from … large galaxies with lots of stars that give lots of possible planets that might support the life forms capable of generating such signals. The randomness of these signals made tracking them difficult … until this fall when astronomers discovered multiple FRBs coming repeatedly from the same spot in space … a “weird” spot that's already the originator of a fast radio burst known as FRB 121102.

According to their reports published recently in Astrophysical Journal Letters and Nature and presented at the latest meeting of the  American Astronomical Society,  astronomers using the 27 radio dishes that make up the National Radio Astronomy Observatory’s Karl G. Jansky Very Large Array (VLA) in Socorro, New Mexico, along with additional radio telescopes in the European VLBI Network (EVN), saw nine bursts between August 23rd and September 18th, 2016, and an additional four bursts all in one day – September 20th, 2016 - coming from the same location as FRB 121102. These faint but steady bursts allowed them to pinpoint their source.

Surprisingly, the host galaxy [of FRB 121102] is a puny, star-forming dwarf system. 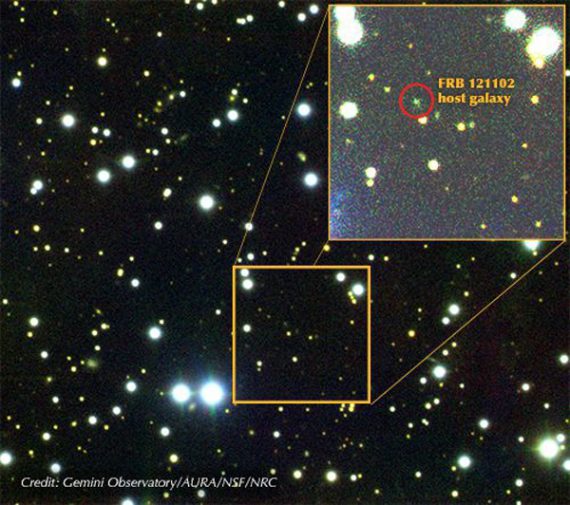 That insult (or was it a backhanded compliment?) to dwarf galaxies came from Cees Bassa, of ASTRON – the Netherlands Institute for Radio Astronomy – who led the research. Prior to this discovery, it was believed that FRBs were singular events caused by cataclysmic events such as supernova explosions or matter falling into black holes. The fact that as many as 13 and potentially more FRBs came from one dwarf galaxy more than three billion light-years from Earth means that whatever is producing one is living on to produce another … and another and another and another … until?

The astronomers don’t have an answer to that question yet, nor can they explain why FRB 121102 is – so far – the only repeating FRB. Shami Chatterjee, author of one of the new studies, offers a few theories.

This persistent radio source could be an active galactic nucleus (AGN) at the centre of a galaxy that's feeding (consuming matter from its surroundings), sending out jets, and these sizzles we see are little bits of plasma being vaporized in the jets. That's not the interpretation we favor. The one we favor is that maybe it's a baby magnetar - a neutron star with a massive magnetic field - and it's got a nebula surrounding it that's powered by the energy being lost by this object. Every once in a while, we're getting a flash from this baby magnetar.

Whatever is causing these repeating FRBs, Flashing Baby Magnetar would be a great name for a band.