The Legend of the Monstrous Wyvern

An approximately mile-long body of water in North Wales, Llyn Cynwch Lake is renowned for the story of its resident monster, a wyvern – a story that dates back centuries, although the precise date is admittedly unknown. Within ancient legend, the wyvern was very much a dragon-like animal, one to be avoided at all costs. Reptilian, and sporting large and membranous wings of a bat-like appearance, it stands on two powerful legs and has a powerful tail that it uses to sting and kill its prey, not unlike a scorpion. In some cases, and just like the dragon of old, the wyvern was said to occasionally breathe fire. All of which brings us to the monster of Llyn Cynwch Lake.

For as long as anyone could remember, the lake and its surrounding landscape made for a peaceful and relaxing environment. But that all changed when the deadly wyvern decided to swoop down on the lake and make it its home. Tranquility, there was no more. The creature was undeniably monstrous. It was described by fear-filled locals as looking like a huge, coiling and writhing monster with a humped back and an undulating neck. On its back were two wings and its feet displayed razor-sharp claws of the kind that could tear a person to pieces. Its breath was reportedly poisonous and green. In no time, the Welsh wyvern began to eat its way through the local populations of sheep, cattle, and pigs. Terrified village folk stayed behind locked doors after the sun set, which was when the beast surfaced from the waters of the lake. The time came, however, when enough was enough.

A local warlock – known as the Wizard of Ganllwid – believed that he stood a good chance of slaying the deadly beast. As he knew, all previous attempts to kill the animal had failed – as a result of its noxious breath causing instant death to anyone and everyone exposed to it. So, the wizard had a brainwave: he decided to round up a team of archers who could shoot the wyvern from a distance. It was all to no avail. It was as if the beast had a sixth-sense about it, and whenever the bowmen were around the wyvern would stay steadfastly below the waters.

Finally, there was a breakthrough, one which proved to be the turning point in the tumultuous affair. On one particular morning, a bright and sunny one, the wyvern left the waters of the lake and slithered its way onto the shore, where it proceeded to bask under a hot sun. As luck would have it, a young shepherd boy, named Meredydd, happened to be in the area and saw the beast, asleep, as he was directing his sheep to his father’s farm. 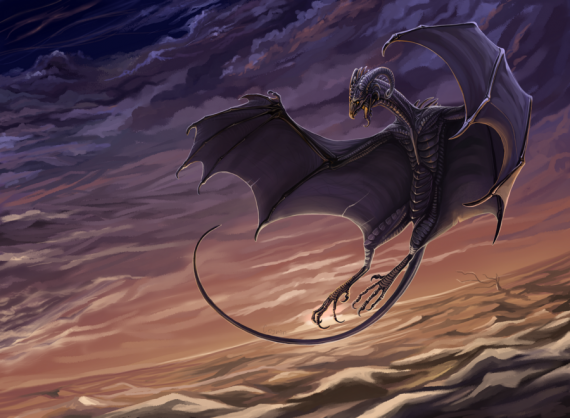 Fortunately, the monster was deep in its slumber – as was evidenced by its hideous, skin-crawling snoring, which was more like the hiss of a gigantic snake. Its body moved rhythmically, its strange form glistening like wet leather. Realizing that this was, quite possibly, the one time, more than any other, that the wyvern could be killed, Meredydd raced to nearby Cymmer Abbey and breathlessly told the monks of what he had just seen. He asked for a much revered axe that hung in the abbey, suggesting that if anything could kill the wyvern it was surely the axe, which allegedly possessed magical powers. The monks agreed and in mere minutes Meredydd was heading back to Llyn Llyn Cynwch Lake, for a battle to the death. But, of whose death, exactly, Meredydd was not so sure. Nevertheless, he was determined to do his very best to rid the area of the loathsome beast.

As Meredydd got back to the spot where the monster slept, he could see that it had not moved. There was no time to lose. The young shepherd-boy used all his might to raise the axe over his head and then brought it down hard and fast on the neck of the sleeping monster. In a split second, head and neck were severed. The jaws of the severed head snapped wildly and widely, in a fashion to a headless chicken, while the neck thrashed around for a few moments before falling limp on the grass. The nightmare was over, no thanks to a powerful warlock, but all thanks to a young shepherd-hand.

The Strange Powers and Amazing Potential of Earwax