The Tree Man of Bangladesh Has Been Cured

Epidermodysplasia verruciformis is tough to pronounce. Tree Man Disease is much easier to say and understand - it's an extremely rare skin condition that causes human skin to look like tree bark. Abul Bajandar from Bangladesh contracted it a few years ago and his plight made worldwide news. The Bangladeshi government vowed to help him by paying for his treatment and for research to find a cure. It was announced this past week that Abul is the first person in history to be cured of Tree Man Disease. Is Bangladesh a great country or what?

Bajandar’s cure was a remarkable milestone in the history of medical science.

Samanta Lal Sen, plastic surgery coordinator at Dhaka Medical College hospital, proudly describes the end result of a massive effort that began a few years ago when rickshaw driver Abul Bajandar, now 27, noticed changes in the skin on his hands. As they became covered with massive warts resembling tree bark, forcing him to quit his job, doctors determined that he was one of only four people in the world infected with Epidermodysplasia verruciformis, then thought to be incurable. It’s an autosomal recessive genetic hereditary skin disorder that causes uncontrollable human papillomaviruse (HPV) infections resulting in the growth of massive scaly bark-like lesions on the hands and feet. 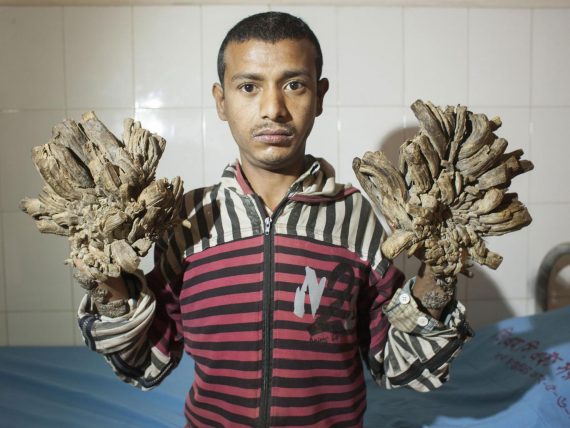 Benefiting from living in the era of social media, Bajandar’s plight received worldwide attention in January 2016 as photographs of his hands went viral, along with his desperate plea:

I never thought I would ever be able to hold my kid with my hands. 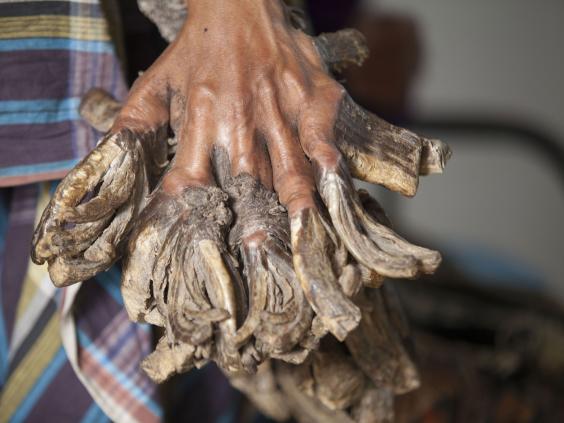 Bangladesh's Health minister Mohammad Nasim announced that the government would pay for his treatment and research on the disease in hopes to find a cure. Abul and his wife and daughter moved into the Dhaka Medical College hospital and have lived there for the past year while plastic surgeons worked on his hands.

We operated on him at least 16 times to remove the warts. The hands and feet are now almost fine. He will be discharged within the next 30 days after a couple of minor surgeries to perfect the shape of his hands.

Samanta Lal Sen calls the surgery to remove 5kg (11 pounds) of warts and reshape Abul’s hands “a remarkable milestone in the history of medical science.” So far, the warts have not grown back. If that remains the case, Abul Bajandar will be the first person in history to be cured of Tree Man Disease. That’s good news for him and for his daughter because the condition is hereditary.