UFO May Have Been Looking for Something in Bodmin Moor

The area of Cornwall, England, called Bodmin Moor just moved up to the prestigious “Two paranormal anomalies for the price of one” status. The home of the mysterious Beast of Bodmin Moor now has its very own triangular UFO sighting and the Cornwall Triangle of UFO activity just got expanded. Are the Beast and the Bodmin Moor UFO related? Did something else at the mysterious Bodmin Moor attract it?

It was really weird. It was something like out of Star Trek. I think it was something from somewhere else in space and time. I have never seen anything like it before. It wasn't from this planet.

CornwallLive reports the Cornwall UFO Research Group received details of this Bodmin Moor sighting recently from a local resident who wished to remain anonymous. He was driving home from work in the early morning when he saw the straight lines of a triangular object the size of “a few football pitches” that he immediately knew was not a cloud.

I kept my eye on it while I was driving and it just hung there. There was no noise. It was moving like it was gradually turning. It seemed to have a tail fin type thing on top and underneath there were two other things that were attached, but I don't know what they were. Then it suddenly sped off.

Although he told his wife, the witness kept the details of this 2009 sighting to himself “because I thought people would think I was mad or something” until recently when the number of UFO sightings – especially similar triangular UFOs – increased in the so-called Cornwall Triangle. 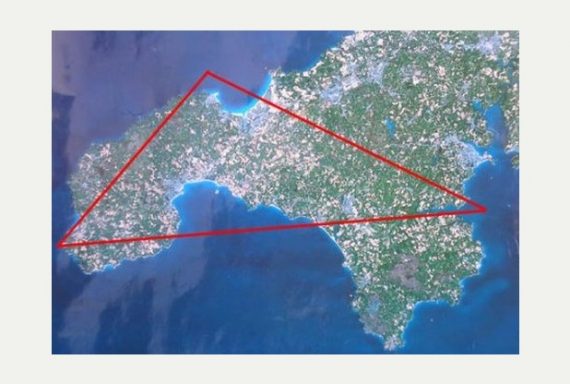 The map of Cornwall UFO sightings compiled by Lionel Fanthorpe of the Cornwall UFO Research Group should now include this one at Bodmin Moor but perhaps it needs an asterisk denoting special attention. Bodmin Moor is most well known for its Beast, most likely an alien big cat that has roamed the hills for decades and could have escaped while being transported by a zoo.

Why would UFOs or aliens have an interest in the Beast of Bodmin Moor? Perhaps it’s not intrigued by the beast but by the Moor itself, which is the highest point in Cornwall, the source of many of Cornwall’s rivers and the home of the Hurlers on Bodmin Moor – a set of three stone Neolithic circles dating back to 1500 BCE.

Then there’s the mysterious Dozmary Pool. This is allegedly where King Arthur received Excalibur from the Lady of the Lake and where Bedivere was said to have tossed it back in. The pool is also rumored to be haunted by the ghost of Jan Tregeagle, a 17th century local magistrate who allegedly made a pact with the Devil, giving him riches in life but condemning him to spend eternity in the “bottomless” Dozmary Pool.

Was the UFO looking for Excalibur? Was the Lady of the Lake an alien giving an alien weapon to Arthur? Is it Bodmin Moor that’s attracting UFOs to Cornwall?

Who knows? It would definitely make a better movie plot than people seeing a secret military aircraft.