UFOs Over Goodyear Are Not Blimps

Say the words “UFO” and “Goodyear” together and it brings to mind a famous incident from the 2012 Summer Olympics in London. This is not about that. Two witnesses recently reported seeing four lights above the mountains in Goodyear, Arizona. This is not the first UFO sighting of this type in Goodyear either. Are aliens looking for blimps in all the wrong places?

According to their report on the MUFON website (case # 81684), a woman and her daughter were driving on the night of January 22, 2017, when they saw four solid white/yellow glowing lights in the sky over Goodyear. They described them as being “larger than stars” and detailed how one of them acted independent of the other three, moving around them before returning to the alignment. The witnesses had the presence of mind to record the sighting.

They also mentioned that “our neighbors also saw them while out driving” and that this has happened before.

We have seen them before in a dark night sky over the Estrella mountains to the East. They are common in this part of Goodyear. We see them several times a year.

Estrella! The name conjures up tales of the so-called Estralla lights. Not to be confused with the (here comes the obligatory mention required in all UFO stories centered in Arizona) Phoenix lights, Estrella lights have been seen over these mountains frequently from Goodyear, which is close to them. One string of lights was seen in 2004 and another in 2015.

Yes, the mountains are located between Luke Air Force Base and its favorite practice target - Barry Goldwater Range. With an ancient Native American history, the mountain range was once part of Mexico and often rumored to be hiding the gold known as Montezuma's treasure, but it’s never been found.

Then there’s that name … Goodyear. Until the TR-3 Black Manta is proven to exist, no manmade object has been mistaken for a UFO more often than a Goodyear blimp. Perhaps the most famous confusion came in 2012 when the Summer Olympics-watching world saw a blurred white saucer-shaped object over the Olympics opening ceremony. 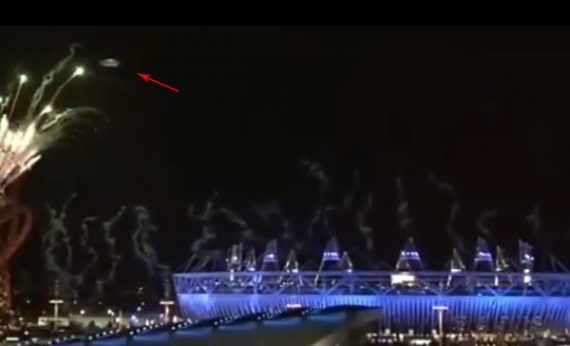 Goodyear finally admitted that it was the “Spirit of Safety” blimp flying over London without the usual “Goodyear” name on it because the company, although it was covering the ceremony for NBC, was not an official sponsor of the 2012 games.

See how easy it is to get confused? Which brings us back to the Goodyear UFOs of 2017. Could be those pesky Chinese lanterns. Could be military flares. Could be ancient spirits. Could be aliens. Definitely not blimps. The witnesses had an interesting attitude about their sighting.

We felt excited and in awe, and happy they would reappear so we could get good pictures and videos.

Whatever it is you think you see in the sky, that’s a nice outlook to have.