Tired of all of the stories about the Loch Ness Monster that have blurry photographs and no physical evidence? Me neither. But once in a while it’s nice to get a real story about real sea monsters with real fossils … and in this case, a real baby sea monster inside its mother! It gets better – the fossils may rewrite the evolutionary history of vertebrate reproductive systems. Whoo-hoo!

The fossils are from a long-necked, fish-eating marine animal called the Dinocephalosaurus, a member of the archosauromorph family, that swam in the seas of South China in the Middle Triassic Period about 245 million years ago. They were found in the Luoping biota, which is considered to be one of the most diverse and well-preserved collections of marine fossils in the world.

While similar in body structure to the plesiosaurs that the Loch Ness Monster is often compared to, this Dinocephalosaurus measured 13 feet (4 meters) in length and most of that 5-1/2 feet (1.7 meters) was neck, according to University of Bristol paleontologist Mike Benton, co-author of the study released this week in Nature Communications.

I think you'd be amazed to see it, with its tiny head and long snaky neck.

While the exterior of the dinosaur was impressive, what they found inside was puzzling at first, according to lead author Professor Jun Liu from Hefei University of Technology China.

We were not sure if the embryonic specimen was the mother's last lunch or its unborn baby. Upon further preparation and closer inspection, we discovered something unusual. 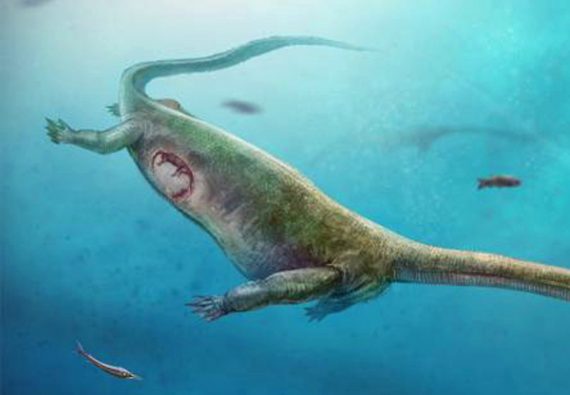 The embryo was facing forward – unusual for a swallowed animal – and of the same species as the dinosaur. That would lead them to believe it was a Dinocephalosaurus – except it was inside the mother’s womb, not inside an egg. Giving birth to live babies meant the Dinocephalosaurus - unlike its reptialian relatives - could stay in the water and not have to climb up on land to lay eggs, leaving the, exposed to predators and the elements. The study states this is the first evidence of a live birth in the family of animals which includes birds, crocodilians and pterosaurs.

The fossils show that the live birth means the sex of the offspring of the Dinocephalosaurus was determined genetically, not by the temperature of eggs in the next, which is the case of similar reptiles such as crocodiles. This is big evolutionary news, says Professor Chris Organ from Montana State University.

This new specimen from China rewrites our understanding of the evolution of reproductive systems.

The move from land to sea – enabled in this case by the development of live birth – most likely happened during a time of mass extinction caused by major environmental changes. Is this similar to the current mysterious changes in frogs, toads and other amphibians we’re seeing in many parts of the world today?

We may soon find out.

Dozens of Dead Owls Found on Road in Idaho