A calf born with five legs and seven feet sounds like an animal that must be worth something, especially if it survives. But $3,000? That’s what farmer Abhinav Abrol has been offered (200,000 rupees) for a newborn and seemingly health calf … healthy except for the extra leg and feet. The offer came from a so-called “cow-worshipping cult” that obviously sees some value in this curious creature.

This new born calf has suddenly become a centre of attraction and people are coming from far flung areas to see him.

Residents of the Ludhiana district in Punjab, India, are protective of their friend, Abhinav Abrol, and not just because they, like many others, consider his calf to be a harbinger of good luck – especially if you touch its fifth leg. The extra limb is attached to the calf’s neck. That alone makes it unusual but this leg has three distinct hoofed feet at the end of it. Is this like a triple-word score in the game of good-luck cattle Scrabble? 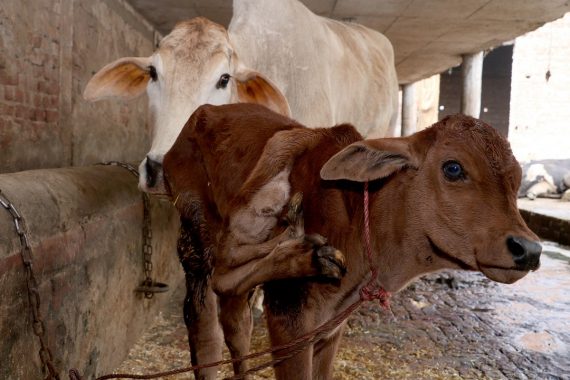 This new born calf has suddenly become a centre of attraction and people are coming from far flung areas to see him. People are really excited to take photos with this calf and some people are treating him as a lucky charm.

A lucky charm and possibly more. As usual, many are connecting it to the Hindu bovine-goddess Kamadhenu – a truly lucky "cow of plenty" who was said to provide her owner with whatever he wanted and is considered to be the mother of all bovines and eleven Hindu gods. Religious experts are quick to point out that Hindus do not “worship” cows but revere them for all of the things they provide.

Of course, you don’t have to be religious to see the value of a five-legged cow that people want to see and touch for good luck. Under the guise of an alleged cow-worshiping cult, someone has offered Abrol nearly $3,000 for the calf – a figure that could be earned back many times over at a buck per lucky rub. It’s happened before with other extra-limbed beasts. So far, Abrol has resisted the offers, saying he’s become attached to the animal and has dedicated it to his father.

His father may want to check the water or the breeding pens on the farm. Having extra limbs is a birth defect called polymelia that can be genetic or caused by outside contaminants. Is it still lucky if the fifth leg came from a nearby nuclear plant?

Let’s hope the five-legged, seven-footed calf brings Abhinav Abrol luck so he doesn’t have to sell out to the "cow-worshiping" cattle cartel.