While most of the world is watching Washington DC for the next major earth-rattling eruption, someone needs to keep an eye on Iceland, where all four of its major volcanoes are exhibiting signs of potential real eruptions of the global winter kind.

Seismic activity tells us we need to be more vigilant than usual but not much more than that now. She is trying to tell us something more than we may understand not completely.

Geophysicist Páll Einarsson tells Iceland’s Fréttablaðið newspaper (Google translated) that he’s most concerned about Katla, a large volcano in southern Iceland that has had multiple earthquakes in its caldera recently, with one measuring 4.3 magnitude. Katla has a long history of regular eruptions every 60 to 80 years. With its last major eruption in 1918, Katla is overdue.

That regularity is a trait of all of the major volcanoes in Iceland, which concerns Einarsson.

They are created to behave fairly regularly over the last decade with eruptions in 1998 and 2004 and 2011. There is an increasing seismic activity there, slowly, and it plans to eruptions in the coming few years.

Hekla, also in southern Iceland, was on a 10-year schedule but its last blast was in 2000 so it’s overdue as well. Einarsson worries about Hekla because its eruptions have occurred without warning. However, current measurements show its magma chambers filling and that’s an ominous precursor.

Northeast of Hekla and Katla are Bárðarbunga and Grímsvötn. Bárðarbunga is the largest and most powerful volcano in Iceland and was responsible for the six-month-long 2014-15 Holuhraun eruption. Its magma chambers refilled quickly and earthquakes of magnitude 4.3 and 4.0 were felt there this week. The Grímsvötn volcano has a seven-year eruption average with the last occuring in 2011, but Einarsson says its magma chambers are also loaded and ready.

Growing seismic activity points to an eruption in the next few years.

Iceland was formed by the Iceland Hotspot where the Eurasian and North American Plates are moving apart. The area around the island has a higher temperature than the rest of the mantle and its own mantle has a higher concentration of stream-producing water. These conditions combine to make Iceland one of the most active volcanic regions in the world, with major eruptions occurring somewhere on the island about every three years. While there are at least 30 volcanic system in Iceland, the most dangerous are the big four that Einarsson is currently worrying about. 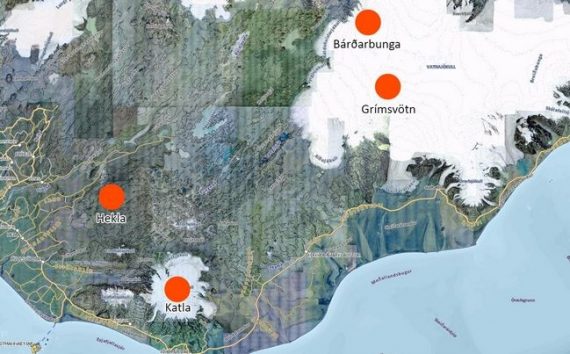 Fortunately, he’s right on top of these volcanoes – seismically speaking – and can provide ample warnings to Icelanders … right?

We can say little what happens next week but we can say what will happen in the next hour.

The next hour? Four of the world’s biggest volcanoes are getting ready to erupt and the best warning those nearby can get is an hour? All of a sudden, Washington isn’t looking so bad.