Johnny Horton and The Ghosts of Country Music Past

Of all musical genres, one could argue that country music has a unique kind of haunting quality. Classic songs like "I'm So Lonesome I Could Cry" by the legendary Hank Williams, while popular hits of their day, became such due to their ability to tap into the raw emotion of human angst and sorrow.

The raw emotion of country music isn't all that haunts us about the genre, however. Songs like "The Long Black Veil", recorded by the likes of Johnny Cash and many others over the years, present us with stories told by an apparently deceased man, who reflects from beyond the grave on the fact that his earthbound lover--and wife of his still-living best friend--stands over his grave weeping on nights "when the cold wind moans."

Another traditional tune Cash sang, "Delia", tells of a man who shoots his trifling woman and is imprisoned for the crime. At the end of the song, the narrator is found complaining that he can't sleep due to "the patter of Delia's feet" all around his bed at night.

Many other examples of ghost stories that find their way into American country music exist. However, more interesting are the instances where alleged real-life encounters with the afterlife have been told by country singers. Perhaps no story is more resoundingly strange than that of Johnny Horton, who not only predicted his own untimely demise, but was even said to have contacted some of still living friends thereafter.

Horton, according to family and friends, had always claimed to be close to the spirit world. Just weeks before his death, Horton had been backstage at an event with Merle Kilgore, when he shared a premonition about his impending fate with his friend. Specifically, Horton believed he would be killed in an accident related to a drunken man.

Shortly afterward on the night of November 4th, 1960, Horton had been performing at the Skyline Club in Austin, Texas, and it was said Horton kept his distance from the bar in the club, fearing that one of the patrons might drunkenly start a fight with him and mortally injure him. The following night, he and his bass player, Tommy Tomlinson, as well as his manager Tillman Franks, were driving near Milano, Texas. With Horton behind the wheel, the trio approached a bridge outside of town on Highway 79 when a drunk driver in a pickup truck swerved into Horton's lane, plowing head-on into the Cadillac carrying the three musicians.

Of the three men, all were injured, but Horton would be the only one to die on his way to the hospital. Ironically, James Evan Davis, the drunk driver that hit them, was not injured in the collision; he was, however, charged with manslaughter, due to his intoxication at the time of the accident.

Eerily, the Skyline Club had not only been Horton's final venue, but also that of legendary Hank Williams. This, however, was only one of several interesting coincidences between the late country singers; each of the men died in a Cadillac, and both had been married at one time to singer Billie Jean Horton. 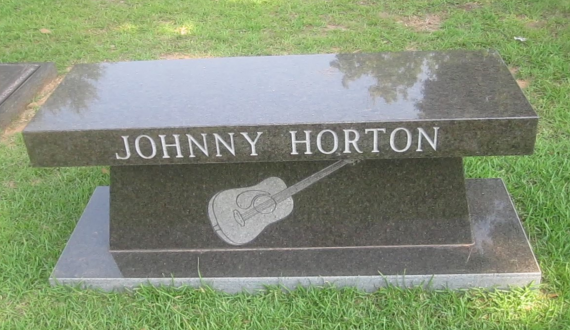 This is really just the beginning of the Johnny Horton strangeness though, because prior to his death, Horton had told many of his friends he would try to contact them if his life ended prematurely.

Some time after Horton's death, Tillman Franks was en route to Nashville, accompanied by singer David Houston. According to Franks, the radio in their vehicle wasn't working properly, and hence on this occasion, the two men were entertained only by conversation during their commute. Suddenly, at one point the CB radio began working, only to reveal Horton's song "One Woman Man" playing right from the beginning. Franks described the sound of the recording as being different from a typical radio signal though, likening it to a jukebox blaring loudly in a roadside honky-tonk. 'The whole song played, and then the CB cut out again," Franks would later tell country music biographer Colin Escott.

Franks shared the story with Johnny's longtime friend, Merle Kilgore, who told Franks that, "Johnny's telling you that the song's gonna be a hit all over again."

Merle Kilgore would, in fact, also claim to have had seen evidence that Horton had made it to the great beyond. According to Kilgore's story, on the night that the two men had been backstage together--the last night Kilgore saw Horton alive--Horton told him that he wanted, if possible, to make contact with Kilgore from beyond the grave. In order to do this, Horton suggested that he would contact his friend with a strange, almost nonsensical phrase, that only he would recognize: "The drummer is a rummer and he can't keep the beat."

Nearly seven years after Horton's death, Kilgore reportedly received a phone call at his home one evening from a man with a northeastern accent. According to biographer Mark Rickert in his book, These Are My People: The Merle Kilgore Story, the man on the telephone had been a member of a small group of spiritualists based in Greenwich Village, New York. During several of their séance sessions, the group had claimed that the spirit of a "cowboy" had visited them, who called himself "Wharton." This deceased cowboy also had a very peculiar message, apparently for a man named "Kilgore." With the help of a DJ at a local radio station, they had found out about Merle Kilgore, and the late country singer Johnny Horton (not "Wharton), and were able to obtain Kilgore's number through an associate of his there at the station.

"Mr. Kilgore, there's more," the man's voice sounded over the receiver. "The spirit of Johnny Horton said to give you this message, and the message is this: 'The drummer is a rummer and he can't keep the beat'."

According to Rickert's account, Kilgore dropped the phone at this point, proclaiming aloud, "Johnny, I got your message!"

If true, it would certainly mark one of the most unusual sets of circumstances ever recorded in the history of American country music, providing only further evidence for the strange appeal for ghostly things that this particular genre seems to maintain.