While the number of flying “flying saucer” sightings seems to be on a downtrend (curse you, flying triangles!), the number of flying-saucer-towed-on-a-flatbed-truck sightings is on the rise. Are saucers prone to mechanical problems? Do the truck drivers have to take out ‘Men in Black’ insurance? Why isn’t the mainstream media covering this?

The latest report, submitted to the National UFO Reporting Center (NUFORC) comes from Fort Leonard Wood, Missouri, where an unnamed witness claims to have seen a flying saucer being transported via truck on I-44 north on February 1st at 10:15 pm.

… saw line of police cars spaced out about a mile with no traffic coming southbound. noticed more police cars with lights keeping traffic held back in the distance about another mile. a semi with flatbed was in the center. As the semi approached, i couldnt beleive that the semi was carrying what appeared to be a saucer shaped object.

The witness was in the cab of another truck and claims to have had an elevated view of a saucer-shaped object that was “dull metallic grey" with “thick short legs coming from the center bottom like fence posts" and a "thick central body and tapering to very thin edges” encompassing the whole trailer. While the report doesn’t reference it, a video of what appears to be the same sighting showed up on the Internet soon afterwards.

This video and other reports on the sighting mention both Area 51 in Nevada (1400 miles away) and Wright-Patterson AFB in Ohio (500 miles away), two places that would have taken the flying saucer convoy past millions of other potential witnesses. Wherever it’s going, it looks similar to another saucer-on-a-truck spotted in Central Illinois on January 31st. That one was identified as a part of an X-47B unmanned drone.

Another saucer convoy was reported less than a year ago on Arizona State Route 77 near Holbrook (getting closer to Area 51). At least this one was covered in an attempt to ‘hide’ whatever it was from the public. Another drone? 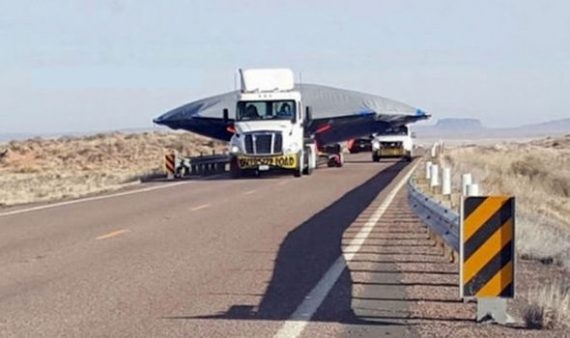 Then there was this one reported in July 2016. Why is it propped at a 45 degree angle? This one doesn’t look like a drone part. Is it the bottom of a boat?

While the number of saucer-on-a-truck sightings seems to be increasing lately, it’s not new. Here’s one from December 2011 that was reported in Oklahoma and Kansas and believed to be … you guessed it … a drone part.

What should we make of the latest sighting? It seems suspicious that the report says it was in Missouri but the video puts it "near" Area 51. Is one (or both) using old footage? What about all of these sightings in general? Is drone-making the hottest business in the U.S.? Why aren’t the drone factories nearer to the Air Force bases? If these are actual flying saucers, are these sightings a case of hiding them out in the open to lessen suspicion ... or perhaps get the public used to seeing them in preparation for a big UFO announcement? If they’re crashed UFOs, why do all of them appear to be intact? Where are the aliens?

Which are your friends more likely to believe as an excuse for why you were late for the party … getting stopped by a train or stuck behind a flying saucer?

An Army of Women Saves India’s Once Reviled Giant Storks