The Pueblo people or Ancestral Puebloans lived in what is now the Four Corners region of the United States where Utah, Arizona, New Mexico and Colorado meet. They were known for living in huge structures known as great houses which contained rooms for the entire village. The greatest great house was the one in New Mexico’s Chaco Canyon, known as Pueblo Bonito, with over 650 rooms. Who ran such a large operation? According to a new DNA analysis, Pueblo Bonito was managed for over 300 years by one family and the lineage was passed down on the maternal side.

For the first time, we're saying that one kinship group controlled Pueblo Bonito for more than 300 years. This is the best evidence of a social hierarchy in the ancient Southwest.

Stephen Plog, an archaeologist at the University of Virginia, worked on the study which was published this week in Nature Communications. Pueblo Bonito has been a mystery since it was discovered in the 1890s because the Pueblos had no written language to record their history there, which began in 800 CE and lasted about 350 years. There was no evidence of any type of organizational structure – some archeologists thought it might have been a leaderless egalitarian society – but there was one burial room filled with precious stones and jewelry indicating it may have been for leaders or even royalty. 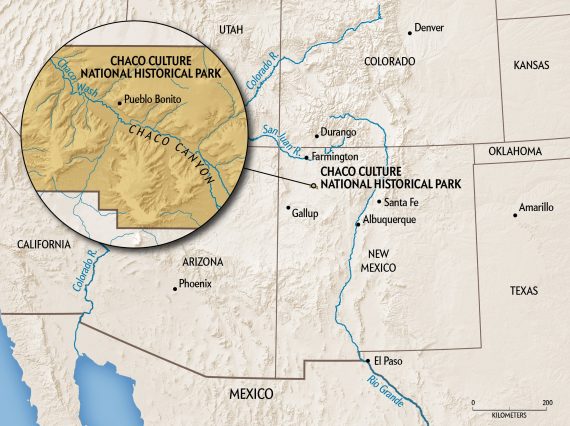 That’s where Plog and the other researchers started. They analyzed the DNA from the 14 bodies in the crypt room and were shocked to find that their mitochondrial DNA – which is passed exclusively from mother to child – was identical, meaning that both the females and the males descended from the same maternal line. Even more shocking, this family appeared to have ruled for the entire 350-year history of the great house until, like the other great houses in the are, the Pueblos mysteriously disappeared from the canyon.

What caused the mass evacuation? The most accepted theory is a severe drought starting around 1130 CE, which coincided with construction stopping on the great house. Another theory suggests the human impact on trees in the area resulted in soil erosion which destroyed the farms.

Now historians have this new information about the sole matriarchal ruling family of Pueblo Bonito. Did they also rule or at least influence the other great houses in the area? Did they cause the downfall of their own great house? Was there a breakdown in leadership, a critical death or family strife? One of the male skulls in the crypt room indicated he was killed by a blow to the head.

The findings are controversial – not only because of the evidence of matriarchal rule but also because the researchers came to this sociological conclusion using biological data. More DNA analysis is needed to confirm the findings and reveal more about this revolutionary discovery.

Maybe the Pueblos can tell us how to get a woman elected president.