There have been a number of recent “flying saucer” sightings that don’t necessarily fit the category of UFOs since they were seen on the ground. However, they stirred up talk of spacecrafts, aliens and all the usual speculation on what these saucer-shaped UGOs (unidentified grounded objects) might be. Here’s an update on three of them.

The Internet went crazy this week over Google Earth images of NASA’s Jet Propulsion Laboratory in Pasadena, California, where an object that  looked suspiciously like a flying saucer was seen on the runway and in the nearby grass. Since the images dated back to 2014, it was unlikely NASA was hiding a flying saucer out in the open for everyone with access to Google Earth to see. 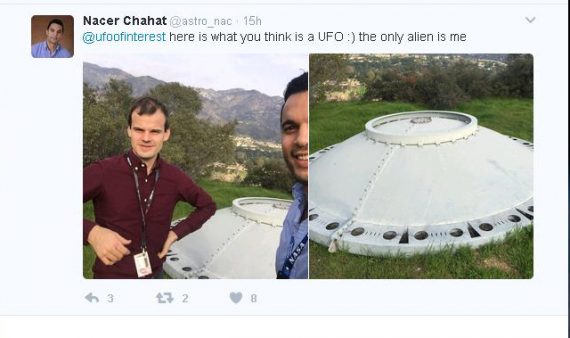 Sure enough, a NASA engineer from JPL showed he had the right stuff by debunking the rumors with a selfie posted on Twitter of himself, a fellow engineer and the mysterious object – which is actually a … well, Dr. Nacer Chahat doesn’t really say what it is but instead makes a wonderful observation based on current U.S. events:

Here is what you think is a UFO. The only alien is me.

Most speculation now centers on the object being a storage container or the cover of some kind of underground bunker. What’s inside? That’s a mystery for another day. 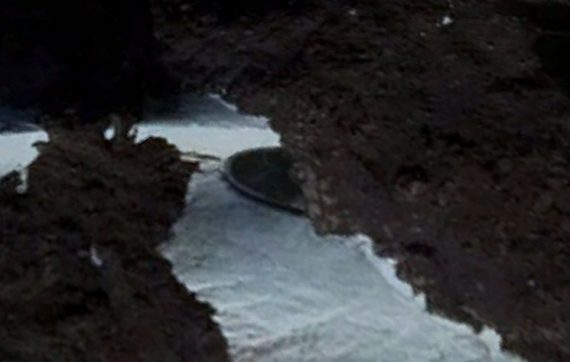 Next up is the flying saucer sighting in Antarctica using … you guessed it … Google Earth: The Saucer-Seeker’s Friend (trademark pending). Images of what appears to be a round disc sticking out from under a rock ledge also made the rounds this week on the web. One of the theories proposed was that it was actually a pond made from melting glacier ice which was distorted because those satellites are just so darned high. Sure enough, if you pull back on that Google image and look around, you see other ponds that didn’t go viral because they suffer from an ailment known as “not round like a saucer.”

Finally, yet another “OMG! It was right there out in the open on the freeway!” saucer sighting came from somewhere on I-74 in Central Illinois where a truck was spotted hauling a large saucer-shaped object. For those who want to believe but don’t want to get fooled again, the saucer was quickly identified as part of an X-47B. Well, that explains it. 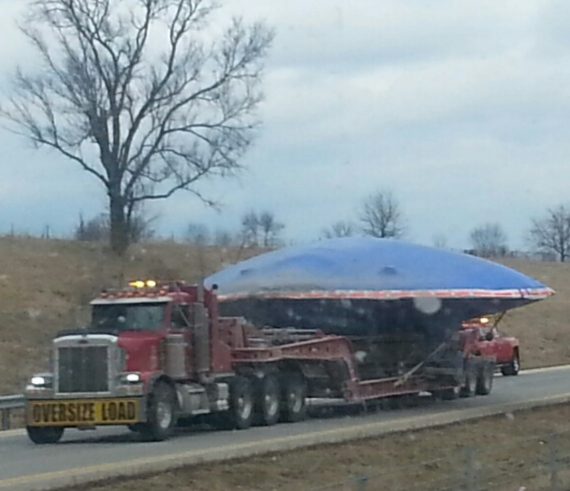 What? You don’t know what an X-47B is? That’s Grumman’s experimental fighter-sized unmanned drone designed to take off and land on aircraft carriers and refuel in the air. It’s scheduled to be deployed in 2019 but you may see one flying around Area 51 or on the road in Illinois. 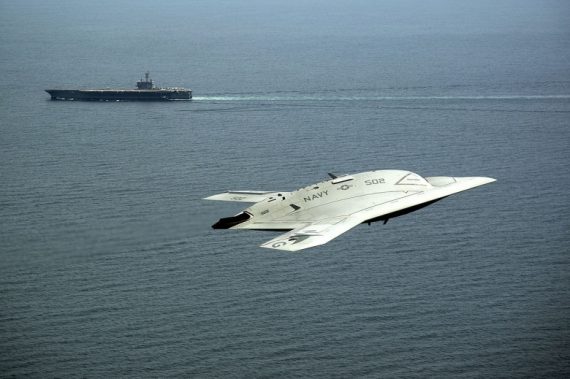 If you want to believe, keep looking.