New UFO Analysis Says Sightings At “All-Time High”… But Are They?

Many have recently asked of the UFO subject (including this writer), “where did all the good times go?” By that, I mean to say that the “really good” UFO sightings of yesteryear seem to have dwindled in recent decades, producing sightings of alleged aerial phenomena that have become increasingly ambiguous, jf not lackluster altogether.

However, citing information from the National UFO Reporting Center (NUFORC), statistician Sam Monfort recently charted the annual numbers of UFO sightings, which show a rather surprising trend: UFO sightings are apparently “at an all-time high.”

However, is it time for UFO researchers to rejoice? Or, conversely, should we take a second look? In my opinion, we should look at some of the data, and see what can actually be learned, rather than trying to make a “for” or “against” argument as it relates to UFOs.

Monfort notes that the data he used only relates to sightings beginning with the 20th century, citing the following of one of the earliest NUFORC sightings catalogued.

"One of the first recorded UFO sightings comes from Portland in 1905 (of course, seeing UFOs before it was cool), where a “buzzing,” sphere-shaped UFO descended from the clouds," Sam notes.

This early sighting mirrors the more ambiguous modern reports of "lights in the sky", which seem to have replaced the elaborate "flying saucers" of yesteryear (more on this in a moment). If anything, the description of a sphere-shaped, "buzzing" object descending from clouds bears the most similarity to ball lightning, a rare form of lighting that takes the shape of an energetic, glowing, globular form that moves through the air (and occasionally even passes through windows). 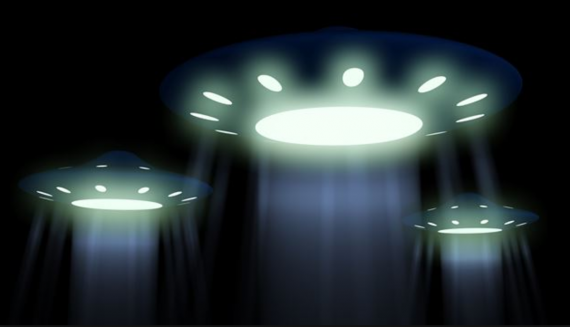 "Other shapes began cropping up later," he continues, "with Saucers dominating the scene until the 1990s, when mysterious lights became the most popular." While it is true that a lot of alleged "saucer" reports did occur throughout the 1950s, up until the 1990s, there is reason to question how many such reports actually dealt with disc-shaped craft at all.

As I noted in my 2013 article, Arnold’s Flying Saucers: Were They Saucers at All?, the perennial sighting that launched the entire public notion of "flying saucers" in the first place appears to have been a sighting of a series of craft which, initially, observer Kenneth Arnold hadn't described as resembling discs at all. It was their locomotion that he likened to a "saucer skipping across the water," which the eager press took and ran with. Over the years, descriptions of missile or jet-like objects, spheres, cone-shaped craft, and a variety of other shapes have similarly been referred to as "saucers", whether or not the objects in question resembled anything close to a disc.

Even in his official designations of various kinds UFO craft, J. Allen Hynek of the Center for UFO Studies (and before that, official advisor to the USAF on UFOs) had said of his "daylight discs" that this terminology did not explicitly infer that all such objects must be disc-shaped. This was something of a "catch all" term he used, admitting that it had been a somewhat hasty attempt at setting initial designations for classification, which he never intended to become a system that would remain in use throughout the decades (because of this, last year I proposed the use of a more accurate, stripped-down system, which I outlined in an article at my blog, Toward a Better UFOlogy: Applying Science to the Study of UAP).

So the question about the "flying discs" should really be, how many were actually "discs" at all?

All semantics aside, one significant issue we must observe with the data Monfort analyzed is the apparent spike in UFO reports that occurred between the period of 1990 and 2000, thereafter leveling off over the course of the decade followed. Quite obviously, this sudden "spike" has less to do with an actual increase in UFO sightings, an instead reflects the widespread appearance of UFO data on the World Wide Web. It is well known that almost coinciding with the appearance of the Internet in homes across the world, UFO discussion groups, newsletters, an other varieties of media quickly amassed to find their new home on the web, with a majority of the broader information relating to the subject now residing there.

The spike in UFO reports throughout the 1990s, rather than indicating UFO sightings increasing, actually reflects a change in the method of dissemination of this data, ushered in with the presence of a new form of communication technology. Hence, the notion that UFO sightings are "at an all-time high" is not the best interpretation of the data.

Sam's article also makes mention of something that NUFORC director Peter Davenport has discussed on a number of occasions: the fact that UFO reports tend to (rather predictably) spike right around 4th of July. However, this seems to really only be the case since around 2008. "Maybe that’s the year someone invented a new type of glowing, floating sphere firework," he says, linking to an elaborate, colorful display which, unlike a "floating sphere firework", appears to be mounted onto a fixture.

A better, simpler alternative might be the use of Chinese lanterns; although they have existed for some time, a 2011 article argued that sales of Chinese lanterns appeared to be on the rise; if this apparent trend was indeed legitimate, could such reports have referred to a spike in sales that actually began a few years earlier?

Arguably, one of the most interesting points Sam makes with his piece is the following passage, where he discusses a phenomenon which I spoke of at the outset of this post: why do so many modern reports of UFOs recount lackluster sightings of ambiguous blobs of light?

Here's what Sam had to say:

"The plurality of post-Internet sightings take the form of strange lights in the sky. Why lights instead of tangible shapes? Maybe claiming to see “lights” is less likely to make your friends and family react skeptically than claiming you saw an actual UFO up-close, especially now that everyone walks around with a handy picture-taking device in their pocket."

Or, could it be that many of the UFOs seen over the years actually were just amorphous blobs of light, and in the absence of videos or pictures to help flesh out the memories of these incidents, they slowly morphed into saucers over time... much like Kenneth Arnold's UFOs had seemed to do.

It's getting to be about time for my obligatory "hey guys, I'm not saying all UFO sightings are just ball lightning" statement; and I do think that's true. There are myriad complexities that present themselves in UFO data that has been collected over they years, and in addition to reports (even the good ones) and photos or other evidence that may accompany them, other very human subtleties must be considered in equal measure.

For instance, we must consider error in judgement on part of the observer, where a person who sees something they legitimately believed to be anomalous was simply mistaken. On the other hand, we have the hoaxers, whose intention had been to deceive, whether for personal gain, or maybe just for a laugh. Delusions and fantasies can't be removed from the equation, nor can the legitimate observation of unusual natural or manmade phenomenon, reports of which become increasingly outlandish over time.

Somewhere in the midst of all these, I do feel that there are reports of unusual phenomenon, which are reported carefully, accurately, and in detail. Still, such reports have done little over the years to help us conclusively determine the cause (or causes) to which broader UFO phenomenon might be attributed.

Sam's article is well worth the read, and can be viewed (along with a lot of nice infographics) over at his blog. Also, one final thing of interest is worthy of noting here: the fact that the vast majority of UFO reports occur in America, with the next most UFO-sighting rich areas generally comprising the English speaking world (The U.S., Canada, U.K., and Australia, with several European countries also seeing higher numbers than other parts of the world). Surprisingly, Russia ranks much lower that the English speaking regions, as does China, Africa, and most of South America.

Could this data actually show that there may be deeper sociological questions that should be asked about UFOs, and if so, what might these proposed sociological associations indicate?

Of course, for years already, there has existed what is known as the psycho-social hypothesis in relation to UFOs, which largely posits that the majority of UFO reports are actually the result of various psychological and social factors.

Perhaps one day we'll come to find that answers to the UFO question exist not within any single philosophy, but are best resolved by giving consideration to several differing views on what UFOs are, and what belief in them represents to humanity.

So in the end, are UFO sightings really "at an all-time high"? Maybe not... in fact, maybe there are simply more reports being logged than in the past, as Sam also suggests. "People in the USA report about 2500 sightings per 10M, a number almost 300 times greater than the global median," he says, asking further whether having Internet access might influence the number of sightings that actually make it to a data center like the NUFORC.

Similar claims about increases in sightings have been noted elsewhere. The Mutual UFO Network (MUFON) reports that between 2008 and 2011, sightings their organization gathered had increased by 67% (note that this is roughly the same period where we noted anecdotal reports citing an apparent increase in Chinese lantern sales). Canada's Ufology Research, reported back in 2012 that sightings had doubled since 2011, although the Association for the Scientific Study of Anomalous Phenomena, which operates in the UK, claimed that since 1988 sightings had decreased by nearly 96%... certainly not an increase there!

Altogether, there are likely to be a number of reasons that statistics might indicate a "rise "in reports, whereas fundamentally, what really seems to have changed over the years is 1)  the manner in which technology, and more specifically, how the Internet has influenced UFO data collection, and 2) how social attitudes toward the subject may have changed over time.

After giving consideration to the aforementioned,  maybe not all that much has really changed after all, as far as any real discernible differences in the state of things as far as UFOs go.

NASA is Sending a Spacecraft to the Sun