We heard this little tinkly bell. We started running and these little men came out of the bushes. There were about 60 of them in 30 cars like bubblecars. They were half my size and looked old.They had greenish faces with crinkles in them and long white beards with a bit of red on the end. They were laughing in a funny way and driving over swamps near the lake.

In September 1979, Angela Elliott described what she, her brother and some friends saw in Wollaton Park in Nottingham, England. The 8-to-10-year-olds – Angela, her brother Glen, Andrew Pearce and his sister Rosie, Patrick Olive and a girl named Julie - claimed they watched the gnomes for 15 minutes and later described their encounter to their headmaster, Robin Aldridge at Southwold Primary, who recorded it. The kids were interviewed by the papers and their story was added to the many tales of gnomes and fairies in England. 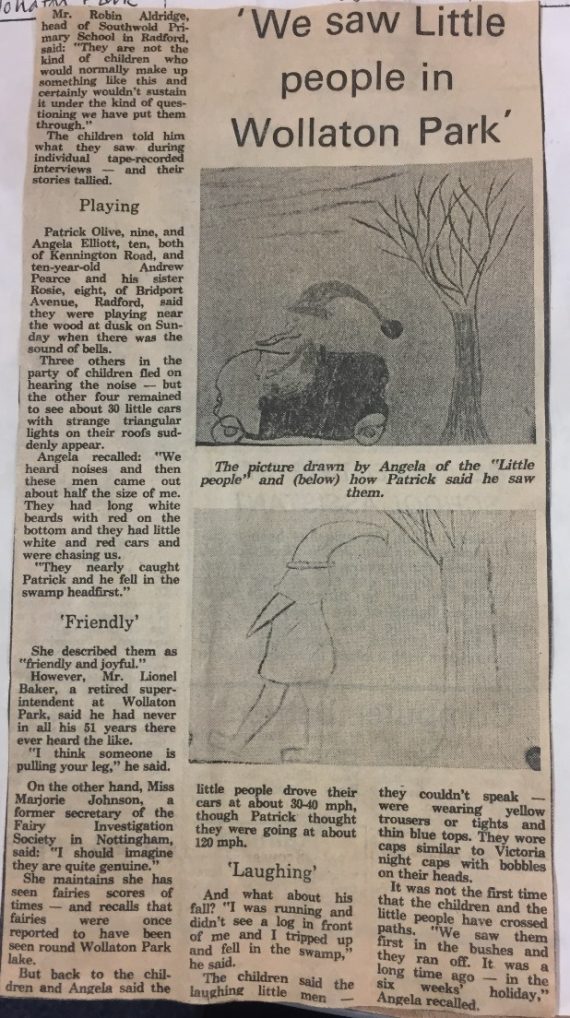 After their 15 minutes of Fortean fame ended, Angela and her friends disappeared. Now, writer and historian Dr. Simon Young wants reunite them and learn more about their story. He’s also interested in accounts from headmaster Aldridge, relatives, friends and anyone else with information about this or other gnome experiences in Wollaton Park.

The experience was interesting in several respects. There are many instances of children coming face-to-face with fairies, but I know of none where six saw the fey together. So many Fortean experiences depend on a single shaky witness or poor chain of custody for the evidence: this is not the case with Wollaton.

The book Modern Mysteries of Britain says Angela claimed to have seen the gnomes in Wollaton Park in the summer of 1979 as well. In Seeing Fairies by Nottingham resident Marjorie Johnson, Jean E. Dixon says she was given gifts by the gnomes in the park and felt their presence but never actually saw them. The book also contains this 1900 account by a Mrs. C. George (who also saw fairies in the park):

She was passing Wollaton Park's gates when she saw some 'little men' dressed like policemen, standing just inside the lodge entrance. They were smiling and looking very happy.

While there don’t seem to be any more recent gnome encounters, the park has its share of celebrity sightings after Wollaton Hall, the old country home on the grounds, was cast as Wayne Manor in the Batman movie, The Dark Knight Rises.

The 1979 gnome tale sounds like a better flick, especially with the little cars. The kids or anyone with information on their whereabouts or the whereabouts of the gnomes can contact Dr. Young at [email protected]