Skeleton of an Ancient Giant Found in Iran

News of giant skeletons in Iran generates talk of Nephilim, giants in stasis chambers and other stories and this new discovery is no different. The skeleton of a being much larger than humans living around 500 CE was found among artifacts at a dig in the Iranian province of Lorestan. The artifacts were dated from 550 BCE to 650 CE, covering a number of empires known to that area, making it an exciting discovery even without the giant.

In the north of the Chia Sabz area we found the grave of an elderly man. It consists of four clay walls, covered with a large stone slab.

Of course, the giant is the main attraction here so chief archeologist Ata Hasanpour introduces him first. The skeleton measured over two meters (6 feet 6 inches) in height, making him a tall man today but a giant among his peers who averaged 160 cm (5 feet 3 inches). He lived in the Sasanian Empire, which existed from about 224 CE to 651 CE and was the last imperial dynasty in Persia (Iran), rivaling the Roman-Byzantine Empire. The skeleton was buried on its side in a north-west to south-east direction in what appears to be a graveyard. Children and young adults were buried in southern part of the graveyard in the same manner.

There’s no indication that the giant was treated with fear or respect when alive or in death. The square graveyard was fenced with stone walls covered with monoliths and a large amount of broken pottery was found next to it. That doesn’t sound like they thought he might be a biblical Nephilim.

Was this giant one of the rumored giants kept in suspended animation in stasis chambers for thousands of years – possibly using alien technology or even being members of an alien race themselves – to be reanimated at some pre-designated time or in the event of an emergency that causes someone to break the glass – from outside or from within? Carbon dating on the skeleton would possibly answer that and Hasanpour has the giant and the other remains currently being tested. If it's indeed a mythical or alien giant, will the results ever be released? 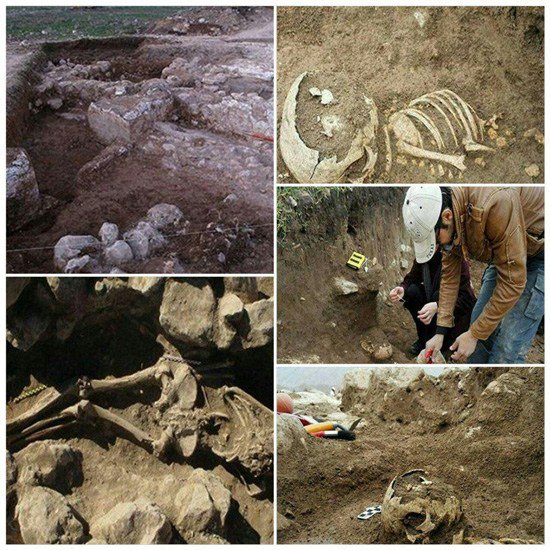 Even if the giant is just a big man, the discovery is important because the artifacts date back to the Achaemenid Empire, also known as the First Persian Empire, and are the first from that time to ever be found in Lorestan. Achaemenid was one of the largest empires in history until it was conquered by Alexander the Great – a military and political giant.

The long skeleton in the Lorestan graveyard is probably just from a very tall man. Whether its giants are mythical in stature or real in power, the history of this part of the world is truly big and interesting.