Is our planet breaking apart? Every day brings a new report about a mysterious or not-so-mysterious giant crack in the ground opening somewhere around the world. Three of the biggest and possibly most devastating are in South Africa, Arizona and Antarctica. What’s the latest status on them and which side should you be on?

Let’s start in South Africa where a massive crack opened on January 6, 2017, between the cities of Daniëlskuil and Kuruman in Northern Cape, South Africa. Latest reports put the length of the fissure at 300 meters (980 feet) long and 30 meters (98 feet) deep. Because it’s so close, it has caused the R31 road to be closed between the cities. Heavy rains and the karst landscape – formed by the dissolution of limestone, dolomite, gypsum and other soluble rocks – makes this a sinkhole haven. The Boesmansgat sinkhole, one of the world's deepest freshwater cave dive sites, is just a few kilometers away. Local residents should be used to this but they’re still demanding that the government do something about this dangerous hole.

The crevice in Arizona is bigger, but fortunately in a remote part of the desert in Pinal County between Casa Grande and Tucson. Fortunately … for now. This two-mile-long, 10-feet-wide and 30-foot-deep mini-canyon has been known about for some time, but recent drone footage shows it appears to be growing. It was discovered in 2014 in Google Earth images by geologist Joseph Cook from the Arizona Geological Survey, who believes it opened to the surface in 2013 during heavy rains. However, the rains didn’t caused the underground fissure. That’s believed to be due to the depletion of underground water by agriculture. More rains widened this crack in 2016 and it looks like it’s going to continue to grow towards nearby Arizona City.

The most serious crack is the one in Antarctica. Running across the Larsen C ice shelf on the northern peninsula, the long (109 miles/175 km) and rapidly growing (6.2 miles/10 km since January 1, 2017) fissure has a massive iceberg hanging by an icy thread only 12.4 miles (20 km) long. While climate change is being blamed for the rapid growth of this fissure, glaciologist Heidi Sevestre spent six weeks there and points out that cracks that create icebergs are a normal part of the life cycle of Antarctica. 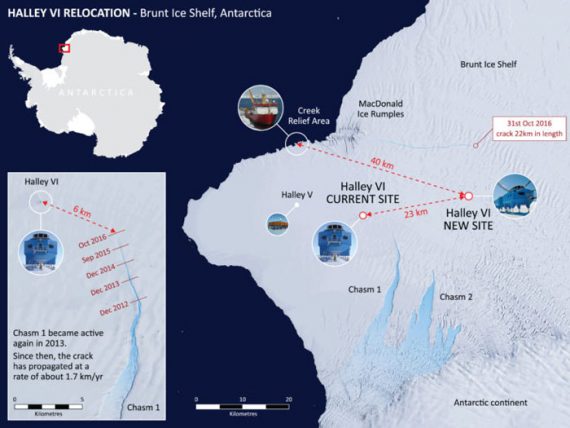 Tell that to the scientists at the Halley VI Research Station on the Brunt Ice Shelf in East Antarctica. A rapidly growing crack there called Chasm 1 is forcing researchers to move the facility 23 km (14 miles) away to safer ice. This isn’t a weekend project that they can offer beer and pizza to entice their buddies to help with. The short 9 week field season means it will take three years to move the buildings and equipment. They’re hoping that’s enough time to outrun Chasm 1, which is cracking open at a rate of 1.7 km per year.

Those are just the big fissures that are in the news this month. There are more crevices and sinkholes being reported around the world. Is the planet breaking apart? Are you on the right side of the crack?

Your Life Really Does Flash Before Your Eyes