The UFO Death Conspiracy: A Famous Incident, and a Less Popular Conclusion

There is an unusual theme that has remained present in certain modern UFO circles over the years. Granted, the UFO subject is rather “odd” in itself, without the inclusion of supplemental weirdness to further complicate an already complex subject. But add to it the running theme that certain UFO researchers have actually been killed in pursuit of the mystery, and it brings a different air to the phenomenon entirely.

Such circumstances have appeared as recently as last year, when the Telegraph and a number of other outlets reported the death of conspiracy researcher Max Spiers. “This is really strange. It does seem that UFO researchers are now being targeted, probably to slow the rate of information being leaked to the public,” said researcher Scott C. Waring, who offered little in the way of evidence for the claim that UFO researchers were being targeted, let alone who might be doing the targeting. In contrast to this, Former Ministry of Defense UFO investigator Nick Pope countered Waring’s statements in a tweet, saying that, “The death of Max Spiers was a tragedy, but having run the UK Government's UFO project I promise we don't go around killing UFO researchers.”

Among the other suggested “casualties” that have appeared over the years have been Edward Ruppelt, the first director of the USAF’s Project Blue Book, who died at just 37-years of age. Others include researchers Morris K. Jessup, Charles Hall, and pilot Fredrick Valentich, whose disappearance over Australia’s Bass Strait in 1978 is perhaps the most legitimately strange of those listed here.

However, perhaps no UFO-related death had been so often recounted as that of Captain Thomas F. Mantell of the Kentucky Air National Guard, who died while pursuing a UFO in a P-51 Mustang on January 7, 1948.

The essential facts about the case are as follows: shortly after a large, flying object was reported by observers near Godman Field at Fort Knox, a group of pilots already in the air were advised to try and locate and pursue the mystery craft. Mantell was the first to spot the object, and after stating his intention to move in closer and engage the craft, he ascended to an unsafe altitude above 25,000 feet, and blacked out (only one of the four Mustangs in Mantell’s group contained an oxygen mask). Mantell’s aircraft subsequently went spiraling to the ground, resulting in a fatal crash that would send a shock wave throughout the early UFO community.

Even Edward Ruppelt believed the object Mantell was chasing had been conclusively explained as having been an experimental Skyhook balloon. However, a number of UFO books and articles over the years have expressed skepticism about the identity of the “balloon”, arguing that Mantell was killed while chasing a bonafide unidentified flying object. Putting that long-held dispute aside, the Mantell incident is of significance for other reasons; namely due to the fact that, as Ruppelt and others would argue, widely-publicized incidents like the Mantell crash and the “Gorman dogfight” that occurred over Fargo, North Dakota later that same year, each played a significant role in shaping public opinion on the UFO subject for decades to come. 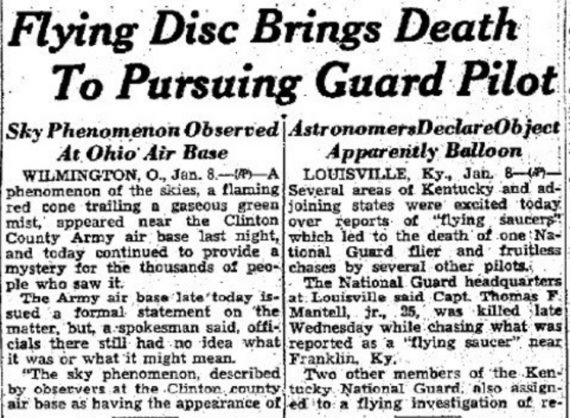 Altogether, Ruppelt seemed to recognize the kind of fear brewing in the American public following situations like the Mantell incident. In his view, it was largely unwarranted, of course, having been based on the mistaken notion that it had been a “saucer” Mantell was chasing in the first place, and the subsequent judgement that his active pursuit led to his death. Hence, for those who looked no further than to read, “man killed while pursuing saucer,” how else were they to interpret the situation?

At times, to be one who studies the enduring UFO enigma seems to require being able to balance the study of valid objects of mysterious origin in the skies, with a knowledge of sociology, psychology, and human perception. In other words, when it comes to the study of UFOs, things are very seldom as they seem, and almost never as they are later reported in written accounts.

This is not to say, of course, that there is nothing worthy of study at all; however, the repeated retelling of “classics” like the Mantell incident, and in such a way that it implies conspiracies when, in fact, little evidence exists which actually points to such conclusions, does little to help the cause.

Sometimes, we have to accept what facts we are given, and whatever conclusions they lead to… regardless of how disappointing or unsensational they may be. Sensationalism sells, but the facts are what lead at the end of the day; only then can we begin to glean any “truth” that may be willing to present itself.

New Evidence Our Universe Might Be A Hologram After All