Look out, Neanderthals … there’s a new hominin in town. Researchers digging in a Portuguese cave have discovered a 400,000-year-old partial skull of what may be a new and interesting species that’s more closely related to Neanderthals than homo sapiens.

The Aroeira cranium is the oldest human fossil ever found in Portugal and shares some features with other fossils from this same time period in Spain, France and Italy. The Aroeria cranium increases the anatomical diversity in the human fossil record from this time period, suggesting different populations showed somewhat different combinations of features.

Writing in the Proceedings of the National Academy of Sciences, Binghamton University anthropologist Rolf Quam describes the cranium discovered in the Gruta da Aroeira cave in 2014. The partial skull was found on the last day of the field season, stuck in petrified sediment in the back of the cave. Thinking fast, Quam’s team used a circular saw to cut the rock around the skull and took everything to a lab in Madrid where a fossil preparator needed 2-and-a-half years to carefully remove it.

The petrified sediment was actually a benefit because it allowed the researchers to easily date the skull piece to 400,000 years ago, pre-dating Portugal’s Neanderthal era of 200,000 to 40,000 years ago. During earlier digs in the cave, they found human teeth, animal bones and stone axe heads from the same time period.

Of course, the cranium was the big find. Using a computed tomography (CT) scanner, they created a 3D virtual reconstruction of the skull, which showed it probably had a cranial capacity of over 67 cubic inches (1,100 cubic cm), making it the same size as other hominins from that era but smaller than the 79 cubic inch (1,300 cubic cm) cranium of modern humans. 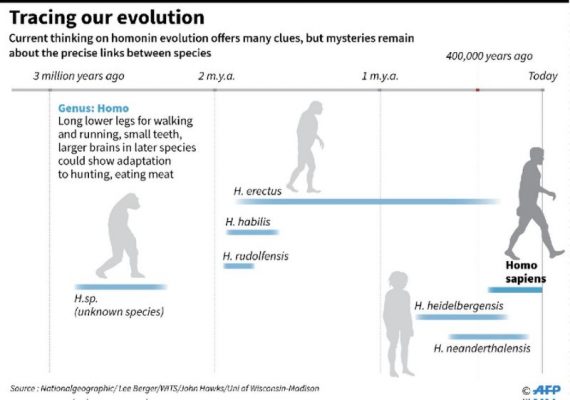 While size matters (even 400,000 years ago), structure and design are also important. The simulated Aroeria cranium has a Neanderthal brow and mastoid process (bony projection behind the ear), but other features resemble Homo erectus, which lived 1.9 million to 70,000 years ago. So what is it?

Features like the hole in its head? That came not from a friend or relative but a possible remote descendant. As the workers cut through the rock to free the skull, a hammer slipped and broke it, leaving the hole.

Perhaps the main benefit of the Aroeria cranium will be to shed new light on how the various lines of hominins like the Neanderthals evolved and possibly interbred after leaving Africa and spreading across Europe and the Middle East. Once the first round of research is finished, it will be put on display in October at the Museu Nacional de Arqueologia in Lisbon.

Science Proves Your Dog is Lying to You