Antarctica’s Secret Nazi Base: Separating the Fact from “Fake News”

It has long been maintained that, toward the end of World War II, the Nazis had been working with highly advanced experimental weapons. Whispers about such technologies, which range from Hitler's own aspirations to create an atomic weapon, to more far-out claims about Wunderwaffe that include directed energy weapons, a mysterious bell-shaped device called "Die Glocke", and of course, alleged flying saucers developed by the Reich, have been circulated in fringe literature for decades.

What is known, of course, is that the Nazis really did produce a range of innovative technologies, which included, most notably, their advanced rocketry, as well as early forms of night vision, and a host of other innovations. But somewhere between the historical fact, and the speculative fiction about their achievements, exists one of the most long-standing conspiracy theories ever to surface about the Nazis: that they maintained a secret military base at the South Pole.

It is indeed true that the Nazis carried out expeditions to Antarctica, which may have combined their interests in locations of strategic importance with the pursuit of "relics", which partially had been driven by the more esoteric beliefs held by members of the Reich. However, the claim has arisen many times over the years that there was more to the Antarctic connection than mere expeditions, and that the Nazis may have desired a more permanent presence on the southernmost continent, perhaps going so far as to establish a secret military base at that location.

The prolific nature of the claims about a "secret Antarctic base" became the subject of a 2006 peer-reviewed paper by Colin Summerhayes, a researcher at the Scott Polar Research Institute at the University of Cambridge, titled "Hitler’s Antarctic base: the myth and the reality." The paper was recently discussed by Motherboard writer Daniel Oberhaus, who noted of the conspiracy theory that, "In the era of pizzagate and fake news, we know all too well that the seduction of conspiracy will always trap at least a few believers who are willing to accept the apparent absurdity of a story, so long as it means that all the dots are connected."

Looking at what Summerhayes had to say on the matter, among the contributing controversies had been the appearance of two U-Boats in Argentina after the war, and later, the strange "invasion" of Antarctica that occurred during the U.S. operation known as "Operation Highjump." Such historical oddities have helped foster belief over the years in a Nazi base at the South Pole, which some maintain actually could have continued to operate secretly well after World War II.

Given the initial lack of information about these various activities, it is not, perhaps, surprising that some people would connect them to produce a pattern in which governments would be accused of suppressing information about ‘what really happened’, and would use these pieces of information to construct a myth of a large German base existing in Antarctica and of allied efforts to destroy it.

Some elements pertaining to the broader mythos about a secret Nazi base at the south pole may have been convincing, at one time, due to their clandestine nature. However, as Summerhayes noted in his paper, "activities that were classified have subsequently been declassified, and it is no longer difficult to separate fact from fancy, despite the fact that many find it attractive not to do so." 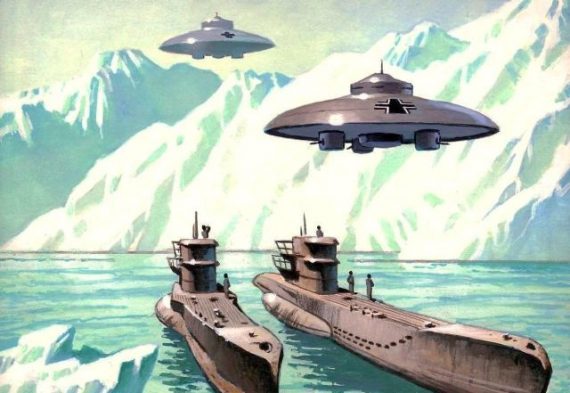 Some time ago, I came to similar conclusions in my article, "Dark Secrets Below the Ice: The Truth Behind Antarctica’s ‘Nazi UFO Base’ Conspiracy", where I noted how rumor and speculation (along with a healthy amount of misreading over the years) helped attribute a variety of misleading things to legitimate statements made by Rear Admiral Richard Byrd, who led the controversial Operation Highjump. In the article, I noted:

All fantastic speculation aside, what we are left with is very little ground for believing that Operation Highjump prematurely ended due to the presence of hidden subterranean races, attacks by woolly mammoths, or even “flying objects” the likes of Nazi UFOs. Few would argue, however, that the various grains of truth pertaining to Byrd’s historic operations have seeded themselves in the fertile grounds of myth and speculation, taking on an all new–and utterly fascinating–life of their own throughout the last several decades.

Before we continue, it seems about time that we drop our conventional "no, we're not saying there was a secret Nazi base in Antarctica" disclaimer. Why do this? Well, it really has everything to do with this sudden phenomenon we now hear about all the time called "fake news," as referenced in the title of this post.

Yes, while it should be evident by now to most readers that I'm offering a critical analysis of belief in conspiracy theories about an alleged Nazi base in Antarctica, in this age of "fake news" there will always be some Redditor or blogger who will come along and, perhaps for their own amusement, try to infer that, "well, despite what you may have actually said, this is what you REALLY MEANT when you wrote that article!"

In other words, in the context of the modern "fake news" phenomenon, it's not enough to present the details of a report as "facts," and then allow readers to interpret such things as the veracity claims made by those referenced in said report. Instead, now journalists and bloggers have to spoon-feed what we're saying to people, and make very clear assertions that, while we may discuss something "crazy" like a secret Nazi base, the subjects we are writing about do not reflect our own beliefs. Failure to recognize this distinction, and express it in our own writing, may result in being branded a peddler of "fake news" as a matter of pure guilt by association (for some excellent commentary on this, check out the article "Mainstream Media and the Rise of Fake News: Crossing the Bigfoot Line" by P. L. Thomas, Professor of Education at Furman University).

This could be one reason why Motherboard writer Daniel Oberhaus included a similar disclaimer with his recent VICE article:

Before we get into this let's make one thing clear: the secret Nazi UFO base in Antarctica doesn't exist. The Nazis did go to Antarctica, but they didn't stash priceless European art in a subterranean Antarctic lair where they also happened to be developing flying saucers. That would be a totally insane thing to believe.

What might not be totally insane to believe, however, is that the Nazis really did have secret bases in various locations, and yes, some of them are only recently being discovered. 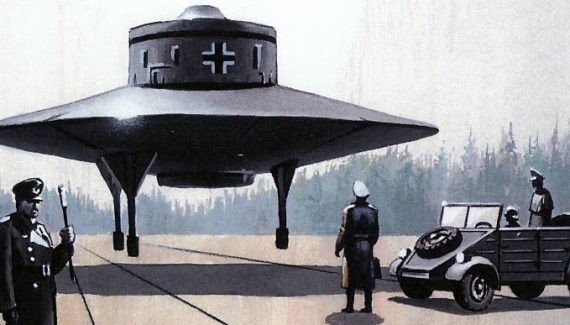 Just last October, The Independent reported on the Russian discovery of, well, a secret Nazi base in the Arctic. However, before anybody starts getting their hopes up, I should note that it was hardly in any way on par with the more elaborate conspiracy theories that have been offered over the years, and, rather than being in Antarctica, this one was located on the entirely opposite end of the globe:

The site – located on the island of Alexandra Land 1,000km from the North Pole 0150 was constructed in 1942, a year after Adolf Hitler invaded Russia.

It was codenamed “Schatzgraber” or “Treasure Hunter” by the Germans and was primarily used as a tactical weather station.

The base was abandoned when the scientists stationed there were poisoned by polar bear meat in 1944 and had to be rescued by a German U-boat.

It has been rediscovered 72 years later and more than 500 objects have been found, including a batch of well preserved documents, the Daily Mail reported.

In other words, it is true that some significant historical discoveries like this do turn up from time to time, helping add further context to the kinds of things the Nazis had aspired to do during the war.

In likelihood, we might even go so far as to say that there could have been similar outposts in Antarctica too; though again, they would be nothing on par with the more fanciful retellings of a "secret base" where flying saucers, and God only knows what else, may have been kept away from world powers at the frozen ends of the Earth. So yes, maybe it's high time we lay the mythology about Antarctica's secret Nazi base to rest, and accept that we aren't going to find a secret bunker full of saucers hidden down there today.

Finally, you can check out this link for more commentary on the historical elements that have helped contribute to this legend, as well as some of the more unusual military activities that have taken place in Antarctica over the years.

Specters of the Emerald Isle: The Lively Ghosts of Ireland