Bizarre Cockroach With a Halo Found in Vietnamese Cave

Cockroaches have been called a lot of things, but it’s a good bet that “saintly” and “angelic” aren’t on the list. That may change with a newly discovered roach found in lava tube caves in Vietnam that has a translucent helmet which gives it the appearance of having a halo like a holy person in religious paintings. However, its mating practices may keep it in the sinner rather saintly category.

Morphologically, it is apparently the most bizarre cockroach which has ever lived that we know of.

Peter Vršanský of the Slovak Academy of Sciences in Bratislava announced the discovery of the tiny (3 mm/0.1 inch long) roach in Zootaxa. His team found it in southern Vietnam in the Tan Phu lava-tube cave which is just a few feet below the surface. While the new species, named Helmablatta louisrothi, shares the cave with bats, it passes on the tasty guano other roaches consume and instead survives on bacteria and fungi. 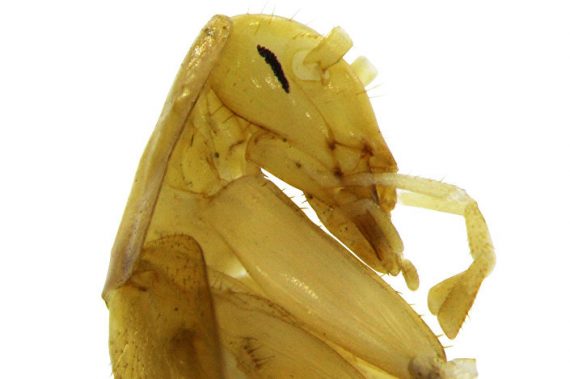 The roach’s halo is on its back and doesn’t seem to have any useful purpose except for mating. The same is true for the remnants of four wings on its back that are no longer used for flying … just for sex. Also on the insect are a hook and a nipper or pincer that are used for … you guessed it … sex.

If you think this is starting to sound like “Fifty Shades of Grey for Roaches,” it gets better. While the males of many roach species have a gland that secrets a nutritional lure (a roachy box of chocolates) to attract females, the halo roach has the gland but no fatty nitrogen for the morsel. Instead, it just makes the smell of it to trick a female into looking for sex.

According to Vršanský, that’s when things get really kinky.

First, the four modified wings hold the female’s head, and place the head under the helmet-like structure. Then the nipper, a sort of pliers, grabs onto the female’s abdomen and the hook fixes on the genitalia. Together, these structures effectively capture the female and secure mating.

Kind of gives a new meaning to "hooking up." Sounds like the plot of a romantic comedy/horror movie. Time to turn in that halo, Helmablatta louisrothi.

When not using it for kinky sex, Vršanský says the hook also comes in handy for attaching the wingless roach to the backs of bats in order to get around … most likely to find more females.

“Hook and a nipper” sounds like a great and appropriate name for a new cocktail.