Over the weekend, a number of sites reported on an alleged story out of Zambia about a dark humanoid figure that was said to have appeared over the Mukuba Mall in Kitwe and supposedly scared scores of people. A lot of people would like to know if it’s real, possibly including J.K. Rowling, who may want to sue someone for copyright infringement or at least for not coming up with a better Dementor apparition.

For those who have been living in a cave for last 20 years, the Harry Potter wiki defines a Dementor as “a gliding, wraith-like dark creature (considered one of the foulest to inhabit the world) employed by the British Ministry of Magic as the guard of Azkaban Prison. The Dementors feed upon human happiness, and thus cause depression and despair to anyone near them. They can also consume a person's soul, leaving their victims in a permanent vegetative state, and thus are often referred to as "soul-sucking fiends".”

If what was reportedly seen above the Zambian shopping mall really was of these “soul-sucking fiends,” this alleged eyewitness account might be more believable:

We were shocked to see images that looked like a human in the clouds for close to 30 minutes. Some started worshipping but others ran away. It was so strange. 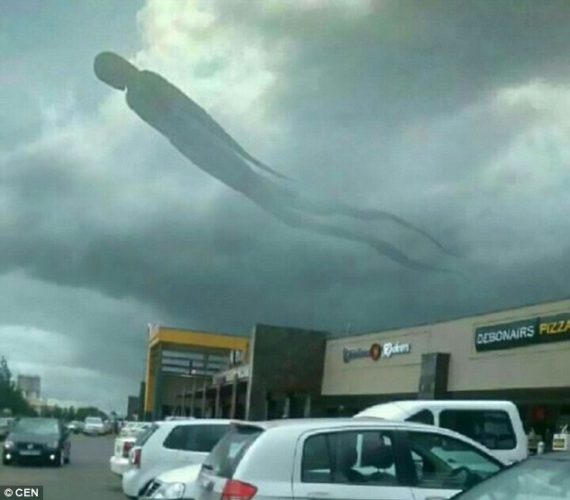 What’s really strange is that this apparition of a Dementor or a flying humanoid supposedly hovered over a mall for 30 minutes, yet there appears to be no videos and only a few pictures of it, none showing anyone looking up, praying, running away or waving magic wands. Some reports suggest the photo makes the apparition appear to be 100 meters (330 feet) long.

This isn’t the first time a Dementor or a cloud resembling a Dementor has been reported. In July 2016, a cloud formation over Jacksonville, Florida, was compared to a Dementor, although it was more cloudish than soul-sucking fiendish.

Meanwhile, back in Zambia …

The reality of the Dementor over a mall started to break down. Commenters on one site who lived in Zambia near the mall said there were no reports of soul-sucking of any kind. One pointed out that the mall in the picture was actually in South Africa and the clouds were from tropical storm Dineo which hit in mid February 2017. In fact, in one of the only reports actually from Africa, a preacher in Zimbabwe said the humanoid in the storm clouds was an “evil water spirit” bringing whatever evil water spirits bring besides rain and wind. Another commenter said the Dementor image has been around for at least four years and has showed up in pictures claiming to be in Zimbabwe and Malawi. Finally, the image looks pretty phony and the details were pretty slim – even for the Daily Mail.

Will J.K. Rowling hunt down the Photoshoppers and sue? Probably not. How about the inventor of the Inflatable Tube Guys?