Did A Movie Inspire The Goat-Man Legend?

A couple of nights ago I had the distinct misfortune of watching what was probably the worst movie I have ever seen. If not, it's certainly near the top of the list. Its title: Night Fright, which was filmed in 1967 and released in 1968. It's an extremely unimpressive piece of very badly acted, laughable hokum - but oddly watchable and even a bit engaging. Night Fright starred John Agar, a man for whom B-movies were made. He appeared in such unmemorable pieces of work as Zontar, The Thing from Venus; The Brain From Planet Arous; The Mole People; and Women Of The Prehistoric Planet. The movie was actually a reworking of a 1964 screenplay written by Russ Marker and titled The Demon of Devil's Lake. 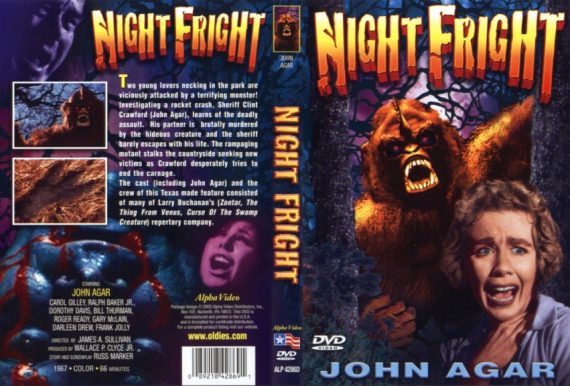 The location of the filming of Night Fright was just outside the city of Dallas, Texas. Most of the "action" takes place in thick woods and on the shores of a local lake (in The Demon of Devil's Lake, the location was Lake Texoma, which borders Texas and Oklahoma). As we learn very quickly, something monstrous is lurking in the woods and near the lake. But, what is it? Well, this is where things become not just strange, but downright deranged. It turns out that NASA has been secretly dabbling with cosmic-rays and animals - an operation called "Noah's Ark." Of course, the project goes awry (how could it not?) and a monster is unleashed.

As the death count rises, the local police are determined to solve the mystery (Agar plays Sheriff Clint Crawford). Strange tracks are found in the area. They resemble those of alligators, but are much larger. Chris and Judy - two of the main characters, who are boyfriend and girlfriend - are hot on the trail of the beast, too. We see lots of Austin Powers-style dancing near the lake, we hear lots of "groovy" '60's music (baby), and we catch brief glimpses of the monster that lurks around the lake and in the woods.

In typical B-movie style, NASA's dastardly experiments with cosmic rays have led to the creation of a strange monster with the feet of an alligator, the body of what looks just like a Bigfoot, and a head that...well...we never get to see the head too clearly, which is probably not a bad thing. It's a distinctly bad-tempered beast that spends most of its time killing the local kids - in classic "Lovers Lane"-type scenarios. Of course, the day is finally saved when the half-Bigfoot/half-alligator gets blown to pieces and our heroes escape unscathed.

So, why am I mentioning an obscure, old movie here at Mysterious Universe? The answer will now become apparent. On watching Night Fright, I couldn't fail to note that on more than a few occasions, the events portrayed in the movie eerily mirrored an equally odd state of affairs that erupted in the summer of 1969, albeit in the real world - and near Dallas, where the movie was shot. Back in 2011, I wrote an article for Mysterious Universe titled "Goat-Man Terror!" To get you acquainted with the story, below are the opening paragraphs of the article:

QUOTE: "I’m sometimes asked, what’s the weirdest thing I’ve ever investigated. Well, answering that question is no easy task, as there have been quite a few of them! But, without doubt, one of the strangest is that of the saga of the Goat-Man of Lake Worth, Texas – which is situated only a short drive from where I live. In the very early hours of one particularly fateful morning in the hot and sticky summer of 1969, six petrified residents of the Texas city of Fort Worth raced for the safety of their local police-station, and related a controversial and amazing story.

"John Reichart, his wife, and two other couples were parked at Lake Worth – and, yes, it was indeed at the stroke of midnight – when a truly vile and monstrous-looking creature came storming out of the thick branches of a large, nearby tree. Reportedly covered in a coat that seemed to be comprised of both scales and fur, it slammed with a crashing bang onto the hood of the Reichart’s car and even tried to grab hold of the not-surprisingly-terrified Mrs. Reichart, before racing off into the pitch-black night and the camouflage of the dense, surrounding trees. The solitary evidence of its dark and foreboding presence was a deep, foot-and-a-half-long scratch along the side of the Reichart’s vehicle." (END OF QUOTE)

The report - and further ones - provoked a great deal of interest and intrigue for the local police, the media, and the public. The legend of Lake Worth's Goat-Man had begun. Today, some researchers believe that the Goat-Man was actually a Bigfoot. Others suggest some sort of supernatural entity. And, of course, there is the theory that someone was running around in an "ape-suit," determined to have a laugh at the expense of as many people as possible.

If the latter scenario is the correct one, is it possible that the hoaxer was - or the hoaxers were - inspired by 1968's Night Fright? There can be no denying there are similarities: (A) In both the movie and at Lake Worth, teenagers and twenty-somethings in "Lovers Lane" locations were among the primary targets; (B) the movie was filmed just outside Dallas, and Lake Worth is slightly more than fifty miles from the city; (C) like the monster in the movie, the Goat-Man was a definitive chimera: it had scales and fur,it was described as "fishy," and it was seen as part-human and part-goat; (D) the local police - in both the movie and in reality - were determined to solve the mystery; (E) the Goat-Man's domain was a specific lake and surrounding woods - just like the hunting-grounds of the monster in Night Fright; and (F) let's not forget that the Goat-Man saga began just a year after Night Fright was shown in the Dallas area.

There is no evidence that the Reicharts were responsible for any kind of hoaxing. In fact, I am sure they were not in any way involved at all. But, someone may have been hoaxing them. If not a literal monster, I think there is a good chance that at least a significant portion of the Goat-Man saga might have been born out of a bunch of kids watching Night Fright and, in the wake of its release, having a bit of fun.

Demon Lions: The Ghost, The Darkness, and Other Mysterious Man-Eaters