Are you ready to move off-planet to an orbiting space colony complete with its own solar-powered gravity? A British space expert claims giant cylindrical structures placed in Earth’s orbit are feasible and can be built within 20 years. Not only that, he says the idea was conceived in the 1970s and could have been constructed with that era’s technology. Of course, they'll be much better now.

Jerry Stone is the author of the book One Small Step about the moon landings and the head of a project at the British Interplanetary Society (BIS) to update those 1970s studies to current technology and beyond. He is presenting his findings and projections at the British Science Festival now underway.

According to Stone, Princeton University physicist Professor Gerard O’Neill asked his students 40 years ago to design a space colony. Their designs – called Island One, Two and Three – were orbiting structures rather than moon bases and differed in shapes. O’Neill restricted the students to using only available technology – not future or speculative creations – and, while he doesn’t say how, Stone believes they could have been built and launched at that time.

In order to create artificial gravity, Stone chose Island One’s cylindrical design as the best for spinning to simulate Earth’s gravity with centrifugal force. While he believes the humans in the colony will function better with gravity, he’s not convinced that the force has to be Earth’s 1G and suggests a lesser gravity might be sufficient (and potentially healthier) as well as putting less stress on the spinning cylinder.

That’s the design. Stone says getting materials into orbit to assemble it will require private space companies to keep the costs down. Those materials could come from Earth but it may be cheaper to get them from the Moon or an asteroid. Power, of course, would come from the unlimited supply of solar energy hitting exterior panels or detached arrays that concentrate and beam the energy to the colony.

Inside, Stone suggests that technology may have to take a backseat to some form of human management or government.

When you are building a space settlement, you are also involved in a huge range of topics – such as town planning, housing, offices, administration, parkland and so forth, agriculture … ecology is a huge thing.

It seems a little farfetched to think that this type of space colony for even dozens of people could have been built in the 1970s. Can it be built today or – as Stone projects – in 20 years? Perhaps on a small scale, but Stone sees them being much bigger than those Princeton students dreamed about. 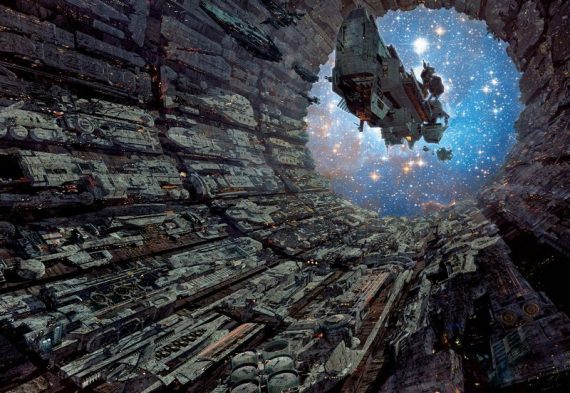 There are other designs for a ring-shaped colony and the cylinders could be four miles in diameter and 20 miles long. They could hold up to 10 million people.

Ten million people living and working together in a confined space? We can’t even get the residents of a small apartment building to agree on pool hours.