There have been a number of astronauts that have gone on-record over the years, weighing in on the possible existence of alien life. Arguably, the most vocal among them had been the late Dr. Edgar Mitchell, cofounder of the Institute for Noetic Sciences, who believed that information passed down from, as he put it, "upper echelons" seemed to indicate that humanity "has been visited."

The latest in the string of "Former Astronauts to Discuss Alien Life" was Alan Bean, a team member of the Apollo 12 Mission, the second such mission to send people to the moon. In a recent interview with News.com.au, he was asked about the possibility of whether life has visited Earth:

"I do not believe that anyone from outer space has ever visited the Earth... One of reasons I don’t believe they have been here is that civilizations that are more advanced are more altruistic and friendly — like Earth, which is better than it used to be — so they would have landed and said ‘we come in peace and we know from our studies you have cancer that kills people, we solved that problem 50 years ago, here’s the gadget we put on a person’s chest that will cure it, we will show you how to make it’."

First question: if we haven't met intelligent aliens yet (and there is no evidence forthcoming, really, that says we have), then upon what does he base this judgement that E.T. would necessarily be "more altruistic and friendly" than humans are? Maybe that's a minor point (and, in likelihood, I would even agree with him), although it still seems rather speculative, in my opinion.

Second Question: What's to say that intelligent alien visitors would necessarily view humanity, in our current stage of development, as being overtly "friendly"? That might be a bit of a stretch, considering that only since the end of World War II have we seen a consistent period of history free from global conflict (although in total, one could look at the varieties of managed conflicts that have continued to occur during the ensuing years, and argue that turmoil and warfare are very much still a part of who we are).

“Just like some day, say 1000 years from now, when we can go to another star and see a planet, that’s what we would do because we will know how to cure cancer, cure birth defects, so we would teach them.”

It's a hopeful outlook, that the absence of evidence for visitation by "people from space" would indicate the fact that altruistic space-brothers haven't arrived to cure the Earth of all its woes. However, in order to assess the validity of a question like this, one thing certainly comes to mind, particularly among fans of science fiction.

It's called the Prime Directive.

In the Star Trek universe, the Prime Directive is an order that governs the involvement members of Starfleet may have with alien civilizations they encounter in their travels. Among its most important tenets is that Starfleet personnel are prohibited "from interfering with the internal development of alien civilizations."

Sure, this is entirely a science fiction concept (for now!) but it stands to reason: if humans were to travel to other planets, especially where it was believed that intelligent life might reside, what degree of involvement would we seek to have in the "internal development" of said alien species? Fundamentally, the question comes down to whether the aggressive tendencies of said planetary group could be properly assessed, prior to the release of technologies that might allow them such things as the elimination of cancer and other illnesses. Even with such "benign" technologies as these, couldn't the potential for their use in aggressive ways (chemical, etc) remain present?

Also, when we think about whether humans would necessarily intervene in the proceedings of affairs on other planets, it would seem that Bean (and others) have probably based this on how we interact with other humans. Which is important within the context of how humans might interact with non-human species on other planets, of course, since it involves the question of whether helping off-planet aliens would be wise, considering cohabitation with them is not an issue. In other words, it's natural for humans to help other humans, as it contributes to the overall longevity of our species; but however concerned we may be with eventual alien species we come across, will cohabitation, longevity, and other factors necessarily be among our primary concerns? 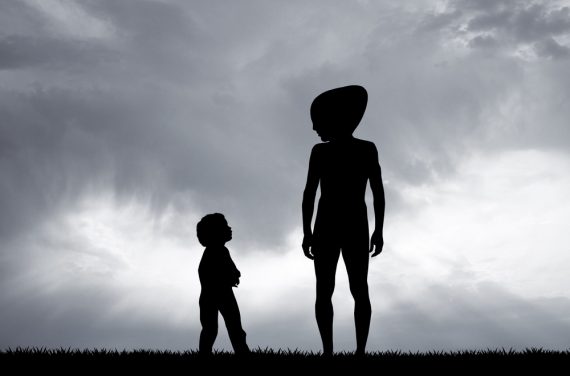 Again, while the Prime Directive remains a fictional concept (for now), it may indeed set a precedent for how humans are likely to interact with alien civilizations we encounter in the future.

Of course, it might be a stretch to assume that we can base the future of humanity, and its interactions with aliens, on things we've found in science fiction books... or then again, maybe that's precisely where we need to be looking, if we're to glean ideas about how the advancements of tomorrow will come to pass (especially if aliens are involved).

Food for thought... and maybe for the future, eh?