“He said that there were no traces upon the ground round the body. He did not observe any, but I did - some little distance off, but fresh and clear."

Dr. Mortimer looked strangely at us for an instant, and his voice sank almost to a whisper as he answered: "Mr Holmes, they were the footprints of a gigantic hound!”

The passage above is, of course, excerpted from the adventures of that most famous detective, Sherlock Holmes, and his remarkable adventure known as The Hound of the Baskervilles. Perhaps as interesting as the story itself had been the dedication at its outset, penned by Arthur Conan Doyle to "My dear Robinson", to whom he gave thanks for the story's inspiration. "It was your account of a west conutry legend which first suggested the idea of this little tale to my mind," Doyle wrote. "For this, and for the help which you ave me in its evolution, all thanks."

Of that "west country legend" which Doyle mentions, there has been a long tradition surrounding the stony outcrops that pepper the landscape near Dartmoor, Devon, in the English countryside. It involves a pack of spectral dogs said to roam the area, for whom one prominent landmark, the "Hound Tor", is actually named.

The legend goes that back in ancient days, a hunter called "Bowerman" had lived there on the moor, and whilst hunting with his pack of dogs, disrupted the ceremonies of a local coven of witches. Punishment would ensue, but not until the next time Bowerman and his dogs were out on the moor, at which time one of the disgruntled witches transformed into a rabbit, leading Bowerman and his dogs off on what they presumed to be a hunt, which resolved in the hunting party becoming stuck in a mire. The huntsman and his hounds were transformed into stone, and today, a large stony outcrop is recognized as "Bowerman's nose" for its profile-like features; the stony protrusions on a ridge nearby became the famous Hound Tor.

Similar legends about "hellhounds" roaming the area have persisted as well, which, along with the area's stony outcrops, were indeed likely to have been inspirations for Doyle's famous story of a spectral hound pursued by the world's greatest detective. However, in recent years the tor had been back in the news, following eerie photographs of what appeared to be a devilish looking "hound" near the famous landmark.

An area falconer named Martin Whitley had been out on the moor one bright afternoon in July, 2007, when down in the valley he spotted something odd looking. Dark in color and shaggy in appearance, the creature was ambling along a nearby path, within just 200 yards of Whitley.

He gave the following description of the frightful "beast" to the Daily Mail:

"It was black and grey and comparable in size to a miniature pony. It had very thick shoulders, a long, thick tail with a blunt end and small round ears.

"Its movements appeared feline, then bear-like sprang to mind... I have worked with dogs all my life and it was definitely not that. I have seen a collie-sized black cat in the area about ten years ago and it was not that - this was a lot bigger.

"You would be surprised at the number of people who have seen black big cats and something resembling a small bear in the area over the course of the years."

Perhaps most concerning of all, the weird-looking creature was nearly within stone's throwing distance of a group of teenagers climbing the tor above the animal. Both the climbing party, and the creature Whitley encountered, appeared in photos he managed to capture, though he noted that the animal seemed to completely ignore its nearby guests.

So what, then, was the creature Whitley managed to observe in 2007? Indeed, the creature might well have most closely resembled a bear, though no bear or other large animals exist in England presently, having been hunted to extinction by around the 16th century (although repopulation efforts have been items of interest among environmental groups in recent years).

So if not a bear, or some variety of large cat (varieties of which are also believed not to exist in Britain), what might the creature have been? 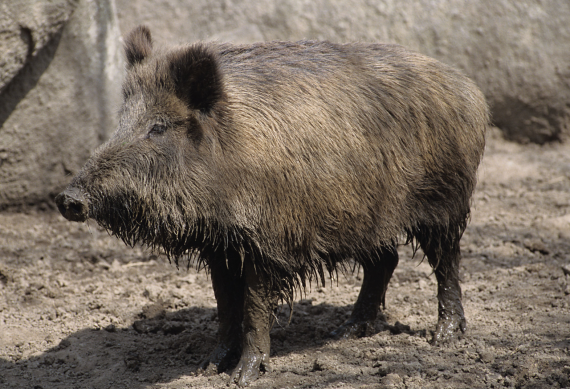 One suggestion is that the eerie "hound" of Dartmoor had actually been a feral boar, the likes of that seen in the image above. Once hunted to extinction in Britain like other large species, boar populations have steadily grown over the last decade. Other suggestions for the identity of the Dartmoor "hound" include a large feral dog, or perhaps a wolverine.

Perhaps in the end, the famous legends and classic literature that tell of Dartmoor's spectral hounds are indeed more frightening that any real beasts found lurking there today. Even still, the rugged features of this ancient portion of Britain's landscape remain a location of intrigue, with their unusual myths and eerie appeal.