Hunt for Tasmanian Tiger Moves to Cape York After Sightings

Has the believed-extinct-but-rumored-not Tasmanian tiger finally been discovered? Are the last of the thylacines hiding out in one of the last remaining wilderness areas on Earth? Yet another expedition is planned for April after two credible sightings on the Cape York Peninsula Far North Queensland, Australia. Is this the real thing or just another wild marsupial goose chase?

They pretty well confirmed that they know about a dog-like creature – not a dingo – that’s often seen at night. They call it the ‘moonlight tiger’… They’re curious. If you’re not moving and not making a noise they’ll come within a reasonable range and check you out then just trot off.

Patrick Shears, a former park ranger, is one of the people who says he’s recently seen a Tasmanian tiger somewhere on the peninsula and backs up his claim with reports from local Aborigines who say the creatures are alive and well and regular visitors. The exact location of his sighting is being kept secret, as is the place where Brian Hobbs, a former tour operator, claims he saw a family of tigers in 1983.

These animals, I’ve never seen anything like them before in my life. They were dog-shaped – I had a shepherd with me so I certainly know what dogs are about – and in the spotlight I could see they were tan in color and they had stripes on their sides. 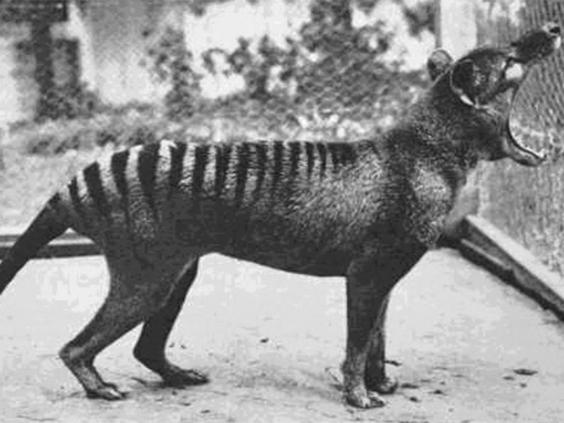 Is that enough of a description to identify what he saw as a Tasmanian tiger? Is what Shears saw a descendant of this pack from over 30 years ago? Bill Laurance, a researcher from James Cook University, thinks it's worth heading the new search.

All observations of putative thylacines to date have been at night, and in one case four animals were observed at close range – about 20 feet away – with a spotlight. We have cross-checked the descriptions we received of eye shine color, body size and shape, animal behavior, and other attributes, and these are inconsistent with known attributes of other large-bodied species in north Queensland such as dingoes, wild dogs or feral pigs.

The ‘hunt’ will be conducted using over 50 wildlife cameras with motion detectors and night vision lenses. Laurance and his partner, Dr. Sandra Abell, are operating in strict secrecy to prevent intrusion by those with other intentions.

We're not worried too much about legitimate scientists doing that, but we're a little worried about what you might call the 'yobbo effect' — where somebody hears about it and then wants to go and shoot one of these things.

Some might say that anyone hunting for the Tasmanian tiger is a ‘yobbo’ – a colloquial term for someone uncultured or uneducated. Dr. Abell defends the expedition by pointing out that the Cape York Peninsula is one of the last remaining wildernesses and they may find other rare species hiding out there.

We've just rediscovered a population of northern bettong where there had been no records since 2003. The benefit of this is that we really will get an idea of some of the other mammals that are in the locations, and we'll also be able to assess feral animal presence.

The northern bettong is a rare and endangered marsupial resembling a very small wallaby. Like all other native Australian species, their near extinction is partially due to the introduction of invasive and feral species by humans --- the ultimate invasive species.

Which raises the question: if the researchers really do find the Tasmanian tiger, should they tell anyone?

We're looking at you, Yobbo.

NASA to Test Fountain of Youth on Astronauts in Six Months