If the Asteroid Doesn’t Kill You, Its Winds Will

When the big asteroid hits, will you breath a sigh of relief when you see on the news that it missed your city? Don’t. A new study found that the bite of an asteroid impact does less damage that the bark of the wind created when it hits the Earth’s atmosphere, even if it breaks up and never actually craters the surface.

The study sounds more like something conducted by an insurance company than a group of astronomers. As reported in Meteoritics and Planetary Science, Clemens Rumpf at the University of Southampton, UK, led a team that calculated the mortality risk of asteroids on residential areas based on whether the impact was a direct hit on a city, a splash in an ocean or a flame-out in the atmosphere.

Their findings were surprising because they defied conventional thinking. Most people assume a tsunami created by an asteroid hitting in water would cause the most overall damage because it could hit multiple cities along a coastline, while a direct hit would be second in causalities since it would affect only one urban area, and an asteroid burning up in the atmosphere should cause the least damage. Instead, the model showed that it didn’t matter where an asteroid strikes the Earth or if it burns up in the atmosphere – the millions of deaths a big one would cause would be widespread as the result of the winds created by the shockwave of the rock hitting the atmosphere. In other words, most people would be dead before they got crushed.

To make the study realistic and scary, the researchers modeled real cities. They determined that an atmospheric-only 50-meter asteroid over London and Berlin would kill 1.2 million in Berlin and at least 2.8 million in London. If it was a 200-meter rock that actually hit, the casualties would triple. A similar asteroid hitting the ocean 100 km (62 miles) off the coast of Rio de Janeiro would kill 30,000, with 92 percent of the deaths caused by the wind. Move it to 10 km (6.2) miles off the coast and the casualties rise to 1.4 million, with 60 percent from wind damage and a third from the heat blast. 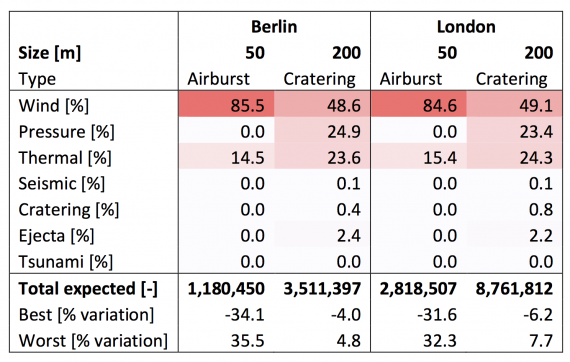 How would the deaths occur? When the asteroid hits the atmosphere, the shockwave would create massive atmospheric pressure waves, tornado-force winds and intense heat. Take the usual death and destruction caused by a killer tornado hitting a city and multiply it by hundreds. Then add the pressure waves and heat – which would occur even if there was no surface impact – and you have conditions that quickly cause internal organs to burst.

Is there any good news? No.

Ok, there’s a little but we already knew this without the study. Big asteroids (200 meters in diameter or more) only hit on average once every 40,000 years. For comparison, the Chelyabinsk meteor that exploded over that Russian town in 2013 was just 20 meters wide and its shockwave ‘only’ damaged buildings for up to 50 miles on either side of its path.

If you’re still worried, start saving your money for an excursion on one of Elon Musk’s space trips.

The Reporter Who Knew Too Much