At the recent 2017 International UFO Congress held in Scottsdale, Arizona, former Blink 182 frontman and UFO enthusiast Tom DeLonge was honored with an annual award for his recent work on the subject.

Billboard reported that, "DeLonge recently received The OpenMinds.tv 2017 UFO Researcher of the Year Award at the 2017 International UFO Congress," noting that DeLonge accepted the award in a video, rather than attending the event, in which he dropped a few hints about his upcoming work involving UFOs.

"There's a lot that I can't say, but there's some that I can," DeLonge said in the video. "I'm so appreciative that I've been acknowledged for this stuff, but I'm not done."

DeLonge caught the attention of OpenMinds and the UFO Congress due, in part, to the release of his 2016 UFO-themed novel, Sekret Machines Book One: Chasing Shadows, which I reviewed here at Mysterious Universe last fall. Following several interviews appearing online promoting the book, in which DeLonge discussed his various interactions with unnamed U.S. government officials, as well as emails between DeLonge and John Podesta turned up in a 2016 Wikileaks dump, speculation began to mount as to the nature of DeLonge's interactions with government (my fellow blogger Robbie Graham covers this in depth in his MU article, "The DeLonge Deception").

In short, there is already historical precedent for misleading information about UFOs being given to the public, and it seems more likely that, rather than being "chosen" to help reveal the truth about UFOs to an eager public, DeLonge may be the most recent in a lineage of hopeful UFO researchers that have been exploited for various reasons. Chief among these reasons is the fact that someone like DeLonge has the means by which to reach large numbers of people (far more than the average UFO investigator, in fact).

However, when it comes to people that are interested in discussing UFOs, and that are equally capable of reaching the masses with their discussions, there may be no one who has done this better in recent years than comedian Jimmy Kimmel.

But Kimmel doesn't just talk about UFOs from time to time; in fact, he has made a point of addressing UFO secrecy during every one of his interviews with former U.S. presidents, the latest being George W. Bush, who remained tight-lipped about the subject. During an appearance in promotion of his new book Portraits of Courage, Bush was asked by Kimmel if he went through secret UFO documents while in office.

"Now that you're out of office, you can do anything you want, right?" Kimmel asked.

Previously, Kimmel had spoken to then-current president Barack Obama who, when asked if he had knowledge of UFOs and alien visitors, told Kimmel that, "the aliens won't let it happen." 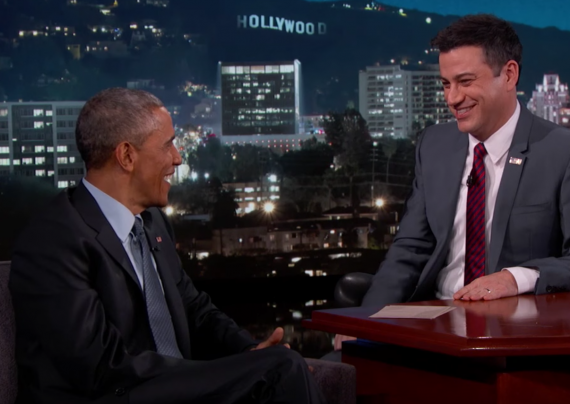 "You'll reveal all their secrets," Obama joked. "They exercise strict control over us." However, when Kimmel pressed again, more seriously, about whether Obama had explored UFO documents, the president, adopting a tone similar to his predecessor, Mr. Bush, stated that, "I can't reveal anything."

Prior to Obama's discussion with Kimmel, former president Bill Clinton had also appeared on his program, saying that he did, in fact, go looking for information about the subject of UFOs, but that he found nothing. When asked by Kimmel if he would tell the American public about it, had he seen evidence of UFOs or aliens, Clinton responded saying, "yeah, I would." 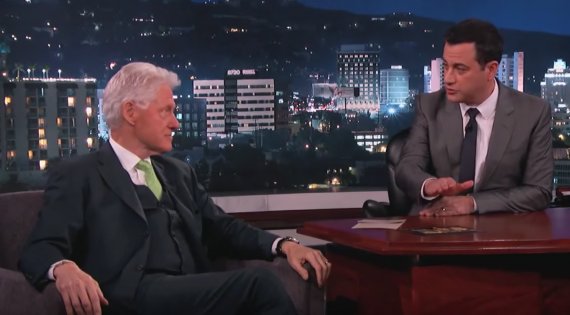 During the 2016 presidential campaign, Kimmel also interviewed Hillary Clinton, during which the subject of UFOs came up in conversation once again. Mrs Clinton (arguably the most well-versed on the subject of all the aforementioned politicians) seemed to share at least some enthusiasm about the subject, noting that UFOs are now called "UAP", an alternative expression for aerial phenomenon similarly used by Clinton staffer John Podesta (with whom, again, it was revealed that Tom DeLonge had been arranging for meetings, as detailed by Wikileaks documents that exposed a number of Podesta's emails).

Sure, maybe Jimmy Kimmel is "just a comedian" and successful late-night host. But ask yourself, who else has managed to directly engage three former U.S. Presidents, as well as a former U.S. Senator and contender in a highly contentious U.S. election, about the subject of UFOs before an audience of millions of viewers?

Of course, Tom DeLonge's interest and contributions to the subject thus far are still of merit. However, the fact remains that Jimmy Kimmel may indeed hold the record both for celebrity to have spoken to the greatest number of presidents (former and current) on the UFO subject, in addition to being the only person to have done so repeatedly on live television.

Yeah, he's a comedian... but all kidding aside, maybe it's time someone recognized Kimmel for his work and interest in UFOs, too.

Black Panthers in the Ozarks? Sightings Continue as Officials Say “No Way”