It sounds like a typical snake hoax, a serpent myth or macabre fairy tale, but all indications are that this gruesome story is sadly true. Villagers on the Indonesian island of Sulawesi caught a 7-meter-long (23 ft.) reticulated python that appeared to have swallowed something large and unidentifiable by its bulge in the snake’s belly. Upon cutting open the snake, they found the body of a 25-year-old man who had disappeared three days before. All indications are that the snake killed him before swallowing the body.

Warning … shocking video and pictures ahead.

It seems he was attacked from behind because we found a wound on his back.

Salubiro Junaidi, the secretary of the Salubiro village in the West Sulawesi province of the island, told the local media that Akbar Salubiro disappeared on Sunday while harvesting palm oil fruit. After three unsuccessful days of looking, a search party found palm oil fruit, a picking tool and a boot … and a big snake. They called for help and the python posse captured and killed the full-bellied, slow-slithering snake.

The video and pictures of the horrific dissection and discovery were published by the local media and that’s how Akbar’s wife and mother of their two children sadly found out about his death.

Stories of reticulated pythons (Python reticulates) – the world’s longest snake – eating humans whole are reported frequently and usually debunked. The snake's diet runs from smaller mammals to primates and experts say it’s extremely difficult for a python to open its mouth wide enough to swallow a human. In addition, they kill their prey by suffocation, not crushing or biting, which makes the reported wound on Akbar’s back puzzling. 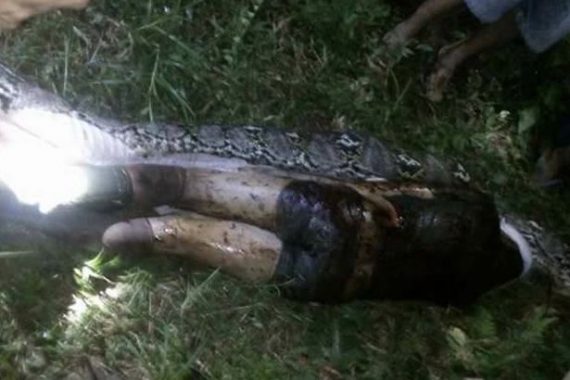 Despite doubts, the length and quality of the video prompted The New York Times, the BBC, National Geographic and other large media outlets to distribute it. The fact-checking site Snopes found nothing to invalidate it, but reserved confirming it until more data was available.

Why did this snake fatally attack Akbar? Experts blame the industry behind the fruit he was harvesting. The vast market for palm oil has caused massive deforestation, driving pythons and other wildlife out of their natural habitats and towards prey they wouldn’t normally consume.

If this is proof that pythons can really kill and swallow a human whole, should Floridians be worried? The large snakes now living and rapidly reproducing in the Everglades are Burmese pythons (Python bivittatus), which are smaller than the reticulated python, averaging 3.7 meters (12.1 ft) in length up to a maximum of 5.75 meters (18 ft.) That makes its mouth and belly too small for consuming humans, even those who deserve to be eaten.

However, when it comes to reticulated pythons, palm oil moguls may want to watch their backs.

The Strange Sounds of Stars Reveal Origins of the Universe