Mysterious Lost Sumatran Pygmy Tribe May Have Been Found

A video purportedly take by trail bikers riding in a forest on the island of Sumatra appears to show a diminutive nearly-naked man running at an extremely fast pace before disappearing into tall grass. The man’s size and the location has many suggesting he was a member of the mysterious Mante tribe which has a status of urban legend in the area because the last known members were seen (and unfortunately captured) in the 17th century. Is the end of the legend? Will it be the end of the Mantes?

The Jakarta Post reports that a group of bikers from Banda Aceh, formerly known as Kutaradja and the capital of Aceh province, were riding on a trail in the local rainforest when one rider – fortunately the one with a running video camera in his helmet – spotted a small humanoid figure with a wooden stick.

As the video shows, the riders stopped and then gave chase. Amazingly, the small human-like figure outran the 50 mph dirt bikes before leaving the trail and disappearing into the roadside vegetation. The riders stopped at the spot, but the camera doesn’t pick up any motion and the riders apparently did not pursue. 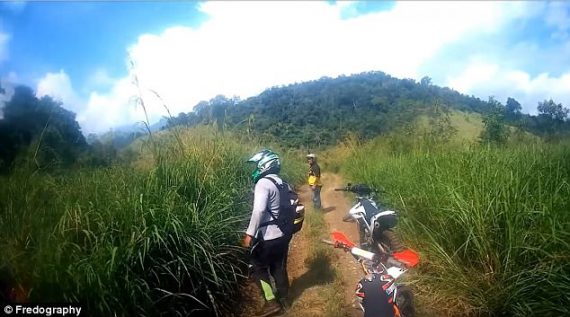 Why not? Fear perhaps, since some of the reports as well as comments on the video suggest the humanoid was a mutant, hobbit, goblin or alien – apparently dangerous even if nearly naked and armed with just a sharp stick and having the possibly magical ability to disappear when encountered.

A more interesting theory is that what the riders spotted was a member of the mysterious and legendary Mante tribe. Referred to as pygmies because of their small size and lack of a universal yet less pejorative name, the last recorded reference to the Mante dates back to the mid-17th century under the Sultanate of Aceh or the Kingdom of Aceh Darussalam. The records mention that troops captured two Mante tribe members (gender not identified) who were presented to the sultan -- possibly Sulṭāna Taj ul-Alam Safiatuddin Syah, a rare female sultan who reined from 1641 to 1675. It’s said that the Mante were killed after they refused to eat, drink or communicate … and apparently weren’t the kind of beings who could disappear. Since then, Mante members have been rumored but never officially seen.

The video has gone viral and will undoubtedly cause searches for the being the riders saw and the mysterious Mante tribe. Could its members have kept themselves hidden in the forest on the northern tip of Sumatra until now? It’s possible. The island is large and not densely populated. While most of the rainforest that once covered the island has been cut down, the Aceh province still has some, where there are believed to be at least seven tribes or ethnic groups living at the intersection of traditional gathering of foods for survival and farming the area for lumber, rubber, coffee and livestock.

Could the Mante be the eighth? Assuming the video is real, what was the diminutive being that the riders saw? For now, the identify is still a mystery.