China is not generally know for pyramids, so any discovery of one in that country is a mystery. When the pyramid is a fraction of the size of those in Egypt and dates to the prosperous Silk Road period, the mystery deepens. Construction workers in Zhengzhou in the Henan province recently discovered a mini pyramid approximately six feet tall situated in a large burial chamber. The search for its origin is strangely controversial.

According to local media translated by others, the workers were excavating for a residential structure next to a road near the Yellow River. When they discovered the artifacts, they called in archeologists from the Zhengzhou Cultural Relics Bureau to determine what they found. The mini pyramid is a tomb, one of two in the chamber (the other is similar in size but shaped like a half-cylinder) in what appears to be a burial chamber measuring 100 feet (30 meters) long and 26 feet (8 meters) wide. 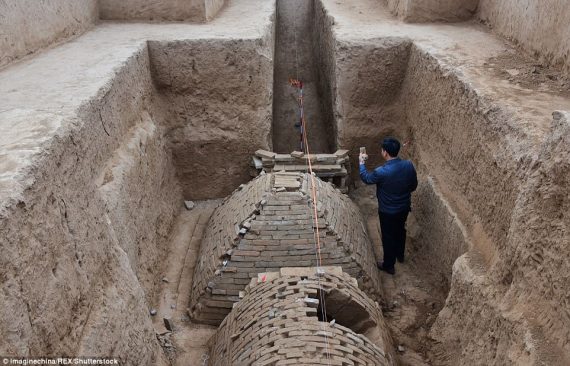 After digging for a month to uncover the brick mini pyramid and burial chamber, the archeologists don’t have enough information to determine who is in the tomb, who built it or when it was constructed. Similar pyramid-shaped tombs have been found in other areas dating to the Han Dynasty (202 BC-220 AD) but no reason has been determined for their shape.

Pyramids of any size in China are unusual and surprisingly controversial. For starters, they’re more moundish than pyramid-shaped and even the largest are far smaller than those in Egypt or other locations. The best known is the Mausoleum of the First Qin Emperor, northeast of Xi'an and near where the famous Terracotta Warriors were discovered. Smaller but similar-shaped mausoleums are located northwest of Xi'an and are believed to be tombs of emperors and their relatives.

While some have been reported to be over 1000 feet (300 meters) high, the pyramid-mounds are in low-lying areas, making their height difficult to gauge from afar. Like most things in China, information to the outside world on these mausoleums is scarce and restricted. Moreover, Chinese experts blame Westerners for labeling these mounds “pyramids” and creating artificial comparisons to real pyramids.

One famous comparison is the story of the "Great White Pyramid." It was first reported during World War II by U.S. Army Air Corps pilot James Gaussman who claimed he saw a white jewel-topped pyramid while flying between India and China. Colonel Maurice Sheahan of Trans World Airlines claimed to have seen and photographed the pyramid in 1947. The widely-distributed picture was later mistakenly attributed to Gaussman and adds to the pyramid theory.

While these pyramid-mounds appear to be easier for humans to build that the Egyptian pyramids, an alien connection has been promoted, especially by Hartwig Hausdorf, author of The Chinese Roswell: UFO Encounters in the Far East from Ancient Times to the Present. 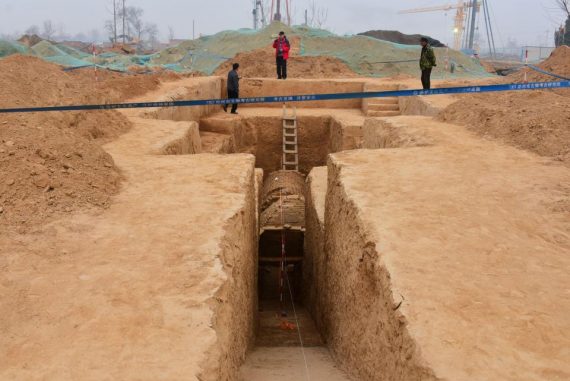 Back to the mini pyramid of Zhengzhou. It doesn’t seem to have needed alien help to build and Chinese officials don’t appear to have any problem with the worldwide distribution of the photographs. This could be a sign that the answer to the mystery of China’s mini pyramids, and perhaps the larger ones too, is close to being solved.

The Mysterious case of the B-17 Phantom Fortress