NASA Wants to Build a Giant Shield for Mars

Those who scoffed at the idea of a Dyson sphere being built around Tabby’ Star (KIC 8462852) may wish they had saved some of their disbelief and indignation for this story. NASA is seriously proposing the idea of building a planet-sized shield for Mars. Unlike a Dyson sphere, this structure would not create fuel for aliens but instead create an atmosphere for humans. Good idea or pie in the Martian sky?

In a paper presented at the Planetary Science Vision 2050 Workshop 2017 held last week in Washington DC, NASA engineers in the Planetary Science Division proposed building a magnetic shield above Mars to replace the magnetic field it lost billions of years ago. When that happened, the door was opened for the Martian atmosphere to escape, water to dry up and temperature to drop. Division Director Jim Green says an "artificial magnetosphere" between Mars and the Sun could potentially bring back an atmosphere, melt ice into water and return the red planet to tropical (or at least warmer) temperatures.

This situation then eliminates many of the solar wind erosion processes that occur with the planet's ionosphere and upper atmosphere allowing the Martian atmosphere to grow in pressure and temperature over time. 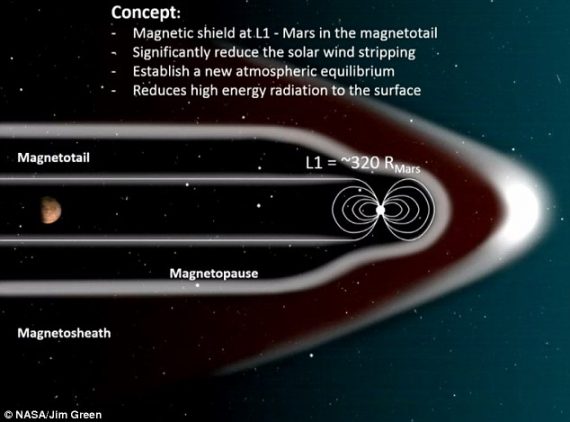 The shield would be placed in space at the L1 Lagrange point where the equal gravitational forces of Mars and the sun would hold it in place. Simulations show that once the shield is up, Mars would regain as much as half the atmospheric pressure of Earth in a matter of years and could be habitable for humans in a few generations.

This sounds like something thought up in a HAARP weather-control lab and Green makes a point to assure that it’s not.

This is not terraforming as you may think of it where we actually artificially change the climate, but we let nature do it, and we do that based on the physics we know today.

So it’s not artificial – except for that manmade magnetic shield out in space. On the positive side, it sounds better than Elon Musk’s idea for raising the temperature on Mars: “Drop thermonuclear weapons over the poles.”

Of course, all of this is still theoretical on a planetary scale but it's in development on the spaceship level. Scientists at CERN (when the subject is weather control, these guys seem to show up right behind HAARP) are said to be working in collaboration with the European Space Radiation Superconducting Shield (SR2S) project on a superconducting magnetic shield made with magnesium diboride (MgB2) coils. The end product – a 10-meter-wide magnetic field 3,000 times stronger than Earth’s – is expected to be available in three years.