Much pain but still time. Believe. There is good out there.
Beware the bearers of false gifts and their broken promises.
We oppose deception. Conduit closing.

Dr. Horace Drew grew up in Florida and says he saw a silver, windowless UFO there at age 10. After getting his PhD, he moved to Australia to work for Commonwealth Scientific and Industrial Research Organization (CSIRO). He has been studying crop circles for 20 years and lectures on them frequently, including last week at the March UFO & Paranormal Research Society of Australia (UFO-PRSA) seminar in Sydney.

Drew has visited over 20 crop circle sites – he points out that they tend to be in Western or secularized counties (Japan, for example) but not in Australia. He admits that some are hoaxers but many others are not. After seeing them with his own eyes, Drew has determined that the circles contain an advanced form of binary coding and now claims he can break it down and has read a few of the messages. 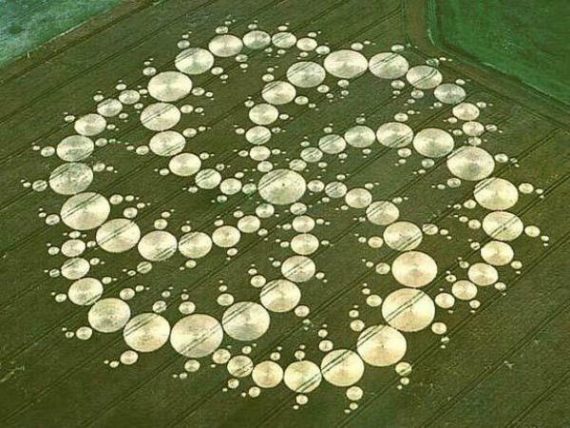 Those messages are of two types, claims Drew. The ones from aliens are greetings from an advanced civilization that looks upon us the way we look upon animals. The binary code is a simple form of communication, like our whistles or bubbles are to dolphins. He believes they’re not interested in being taken to our leader.

The crop circles made by time travelers from the future are not even for us, says Drew. He thinks they’re markers to help them identify time periods, but doesn’t know enough about space time physics to decode the messages.

There are definitely humans living there in about 5000 years with time travel capability. They're coming back and flying all over Earth. They seem to just say 'this is a certain day' and mark it.

When it comes to spotting hoax crop circles, Drew says to look for imperfections and sloppy work. Crops that are bent "halfway up" their stems instead of all the way to the ground are made by today’s human hoaxers. Aliens and time travelers are perfectionists with advanced circle-making technology.

(They use an) "unknown energy that heats the crops up. It's like microwave energy but is something beyond earth's science. It can pattern the wheat. If there's a craft, it's silent, noiseless.

Dr. Drew even offers some proof for the doubters.

Laboratory results on plant or soil samples taken from a crop circle in Brazil in October of 2016 show that it was formed by unknown sterilizing images.

Hard to believe? Drew blames world leaders for spreading the “hoax” stories because they fear the panic that would ensue if humans knew that aliens and time travelers were real and were sending messages.

Are crop circles really messages from aliens or time travelers? Wouldn’t such advanced civilizations or humans from the future want their greetings, advice or directions on how to get back stored on something a little more permanent?