Shark Approaches Diver to Pull Knife From Its Head

It would be anthropomorphic to say that a shark asked or even begged a dive instructor to pull a 12-inch butcher knife out of its head, but it’s hard not to feel that way while watching this video of it actually happening.

According to local news reports, the incident occurred recently in the waters near Snapper Reef off the coast of Cayman Brac, one of the Cayman Islands. Scuba diving instructor Brett Johnson was out with a group of students when he spotted the small (3-foot) shark with a big (12-inch) knife protruding from its head. Johnson approached what appeared to be a nurse shark and suddenly got a little anthropomorphic himself.

At that point, the shark turned around and settled right below me as if asking for help.

Johnson says he gently pulled on the knife and it fortunately came out of the shark’s head without much effort. Waxing anthropomorphic once again, Johnson thinks the shark recovered and came back to say thanks.

I can’t say what happened or why it ended up getting knifed in the head, but fortunately it came out easy enough and the shark seems to be doing all right. It was seen again on Wednesday swimming around the same reef.

Nurse sharks (Ginglymostoma cirratum) can reach 10 feet in length but are nocturnal bottom-dwellers with small mouths that prefer crustaceans, mollusks and small fish to humans, so it doesn’t seem likely that the knife was used to fend off an attack. Whatever the reason, the person who did it would be subject to a $500,000 fine or four years in prison if caught because shark fishing has been banned in the Cayman Islands since 2015. 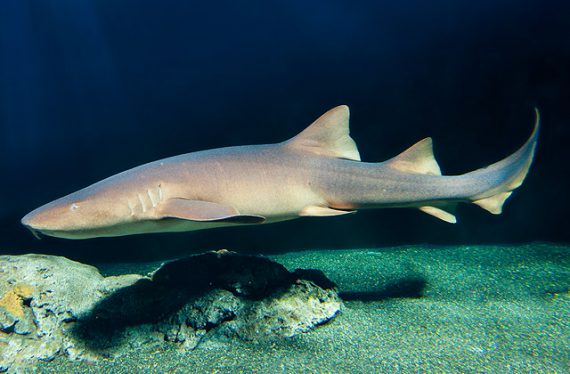 A $500,000 fine or four years in prison? I guess it’s true when they say that lawyers take care of their own. (Send your complaints to the publisher of the Big Book of Lawyer Jokes).

It’s not surprising that the nurse shark recovered from the attack so quickly. Externally, they are constantly shedding parts and regrowing  them quickly. Internally, sharks have a fantastic but little-understood immune system that unfortunately has made them vulnerable to humans who mistakenly and tragically believe that eating them will prevent or cure diseases.

This shark was fortunate that the knife didn’t hit any vital organs and the human it encountered was more interested in the shark’s health than his own.

Perhaps this act of kindness will get Brett Johnson some free legal services one day.