Siberia’s Doorway to the Underworld is Growing Rapidly

Call it the Doorway to the Underworld. Call it a hellmouth. Call it a megaslump. Call it the Batagaika Crater. Whatever you call this massive Siberian hole in the ground, don’t get too close because it’s consuming the land around it at an alarming rate … rumbling and belching as it eats.

Geology professor Julian Murton of the University of Sussex has finally completed his nearly year-long study of the hole, published in the journal Quaternary Research. While most people just peer in and marvel (or shudder) at its sheer immensity and appetite – currently measuring 1 km (.6 miles) wide, over 100 meters (300 feet) deep and widening at a rate of up to 30 meters (100 feet) per year – Murton has been examining the sides of the crater.

Why the sides? Since it first opened to the underworld in the 1960s due to melting permafrost caused by deforestation in anticipation of road construction, the crater has been exposing deeper and deeper layers of past permafrost frozen in sediment. According to Murton, these ice and sediment slices are revealing a 200,000 year “continuous record of geological history, which is fairly unusual." Fairly unusual? Scientists so love their understatements. 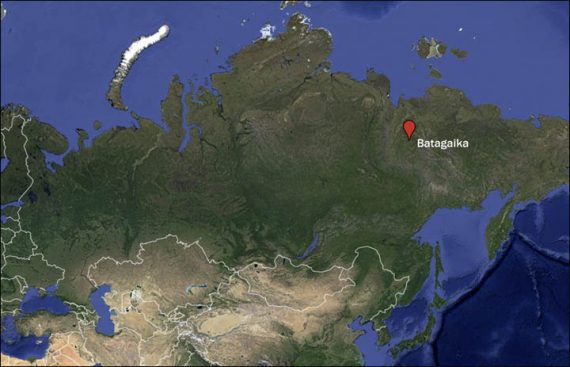 Right now, Murton and his fellow researchers are most interested in more recent history in the crater – specifically, 10,000 years ago when the last Ice Age ended. He’s looking for indications of what happened during subsequent periods of … you guessed it … climate change and warming.

The Batagaika site contains a remarkably thick sequence of permafrost deposits, which include two wood-rich layers interpreted as forest beds that indicate past climates about as warm or warmer than today’s climate. The upper forest bed overlies an old land surface that was eroded, probably when permafrost thawed in a past episode of climate warming.

Murton is planning to drill bore holes to get better samples of the ancient permafrost, but he’s in a race against the ever-increasing appetite of the Doorway to the Underworld itself. In an interview with the BBC, Frank Günther of the Alfred Wegener Institute in Potsdam, Germany, says satellite images of the crater show it devouring its way to a nearby valley which is also eroding and their combination could cause even faster growth. 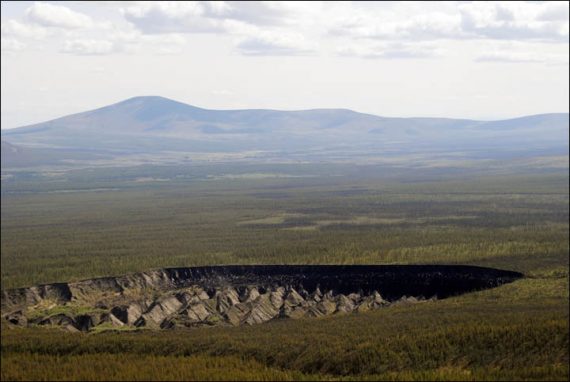 Then there’s the methane. The ancient ice contains organic matter and carbon that is being converted to methane and carbon dioxide by microbes and released into the atmosphere. And, while the Batagaika Crater is the biggest and most famous, it’s not the only hole caused by permafrost melting in Siberia.

Which raises the question: Is the Batagaika Crater opening a doorway to the underworld or is humanity exposing the underworld to something even worse?

Will we survive to learn the answer?