Specters of the Emerald Isle: The Lively Ghosts of Ireland

Irish folklore is often most famously associated with leprechauns, the diminutive and often mischievous little folk of the country. Often depicted sporting green apparel and all manner of eccentric features (with a particular affinity for buckles), they are perhaps overshadowed only by "the gentle folk" themselves, the faeries who were famously said to come and steal away weary travelers by night.

As lively and renowned as Ireland's perennial faerie lore remains, there is no shortage of matters dealing with the afterlife in the cultural heritage of the Emerald Isle. Ghost stories are rife throughout the legends of the Irish countryside, with

Irish poet William Butler Yeats wrote many collections of ghost stories about his country, inspired by one "Paddy Flynn", an old hermit he had known who possessed, among his eccentricities, a fondness for such tales of the spectral. In his The Celtic Twilight, Yeats recounts thusly some of the beliefs about the common ghost said to inhabit many Irish homes:

The house ghost is usually a harmless and well meaning creature. It is put up with as long as possible. It brings good luck to those who live with it. I remember two children who slept with their mother and sisters and brothers in one small room. In the room was also a ghost. They sold herrings in the Dublin streets, and did not mind the ghost much, because they knew they would always sell their fish easily while they slept in the 'ha'nted' room.

I have some acquaintance among the ghost-seers of western villages. The Connacht tales are very different from those of Leinster. These spirits have a gloomy, matter-of-fact way with them. They come to announce a death, to fulfill some obligation, to revenge a wrong, to pay their bills even—as did a fisherman's daughter the other day—and then hasten to their rest.

"It is demons, and not ghosts, that transform themselves into white cats or black dogs," Yeats wrote, acknowledging the long-held traditions of "spectral hounds" said to roam parts of the British Isles. Interestingly, as Yeats describes of traditional Irish ghost stories and beliefs associated with them, it was actually considered good luck to allow a ghost to reside in one's dwelling place.

In celebration of Saint Patrick's Day 2017, Irish Times featured a short collection of ghostly tales, which in accordance with tradition, had adorned the front page of the Weekly Irish Times 129 years ago. Among the stories in the collection is a familiar trope within ghostly retellings from over the years, which tells of a ghostly apparition of a "woman in white" who appears by a roadway.

As the driver of a coach is approaching, he notices the ghostly figure crossing the road, and passing by her, seems to notice a portion of the car passing directly through her:

On went horse and car, the edges of the load preventing him from seeing the white form. Having advanced two or three yards, he looked bank, fearing to see a mangled body on the road behind him, but he saw instead, the white appearance standing in the centre of the plot of grass, her hand seeming to shade her eyes, as she looked earnestly after him. Terrified as he was, he never turned his gaze till a bend in the road cut off the view. 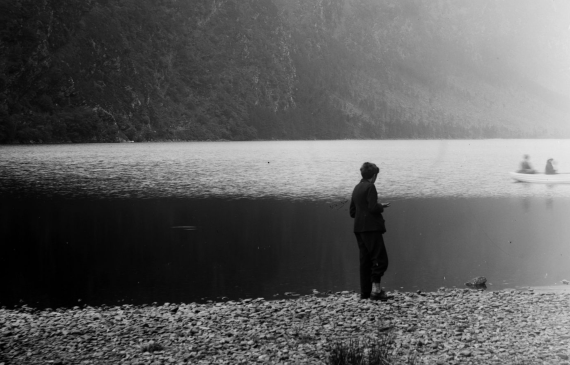 This story bears similarity to certain American legends of more recent origin, which often tell of "phantom hitchhikers", often taking the appearance of a young woman by a roadway in need of transportation home following an automobile accident or some similar mechanical malady. Upon being brought back to her presumed place of residence, the woman disappears, only to have family members advise the bewildered samaritan of the passing of their daughter some time earlier.

IT writer Dean Ruxton noted that, "telling ghost stories by the fireplace isn’t really the done thing on St Patrick’s Day as we know it, but in 1888, you had to make your own craic." As to why the ghost stories were a featured item in 1888, it had been said around the time of publication that the Saint Patty's Day roundup had been “designed to interest all classes of readers, and to please the literary tastes of old and young alike.”

Hey, whether or not you actually believe them, who doesn't enjoy a good ghost story from time to time?