Strange “Super Groups” of Humpback Whales Are Suddenly On The Rise

Over the last several years, biologists have seen humpback whales undergoing a resurgence, and with it, some unusual behavior too.

Most notably, these massive mammals of the deep, which normally swim alone or in small groups, have been observed in massive groups. In more than 20 separate instances, large groups of as many as 200 whales have been observed together in one location.

This unusual phenomenon was the focus of a recent paper in the journal Plos One, titled "Humpback whale “super-groups” – A novel low-latitude feeding behaviour of Southern Hemisphere humpback whales (Megaptera novaeangliae) in the Benguela Upwelling System."

According to the paper's abstract:

The paper's lead researcher, Ken P. Findlay, says the "super groups" being observed represent recent changes in behavior among the creatures, adding that "no such dense feeding aggregations have been reported elsewhere in low or mid latitudes during Southern Hemisphere humpback whale migrations."

"Aggregations of whales of this size have seldom been reported in the literature," Findlay adds, "with 'large' groups often numbering in the range of 10 to 20 or less."

This is not the only unusual behavior observed among humpback whales in recent years. Back in May 2012, a group of researchers in Monterey Bay, California, reported observing a pod of killer whales that attacked a gray whale calf, which was killed during the ensuing struggle. Shortly thereafter, a pair of humpback whales appeared, followed by more than 14 others, who intervened and prevented the killer whales from consuming the deceased calf.

Alisa Schulman-Janiger provided the most impressive account of the intervention, noting that, “One specific humpback whale appeared to station itself next to that calf carcass, head pointed toward it, staying within a body length away, loudly vocalizing and tail slashing every time a killer whale came over to feed."

The humpbacks continued their strange, protective vigil for another six hours, thrashing fin and tail at the hungry orcas any time they appeared near the deceased gray whale calf, even abstaining from feeding on available food sources in the vicinity during this period.

National Geographic reported on the unusual incident, noting that over the course of the last 67 years, there have been at least 115 documented incidents that display interactions between humpback whales and orcas which might be deemed similar to this. The big question, of course, is why this unexpected behavior by the larger whales would occur, as it is seemingly contrary to their best interests to refrain from feeding just to interfere with the predation of another whale species.

As for the more recent "super groups" of humpback whales, a variety of reasons for these mass gatherings have been proposed, which range from the idea that environmental changes are occurring, to the notion that the recent humpback "renaissance" could be the primary factor.

In other words, we could be seeing bigger groups because there are more whales in the oceans.

Then again, maybe the whales are gathering in numbers and planning some kind of massive cetacean uprising, in which case maybe we can expect to be seeing more of the unusual "Team Humpback" vs "Team Orca" turf wars.

Boy, wouldn't that be a "whale tale"? 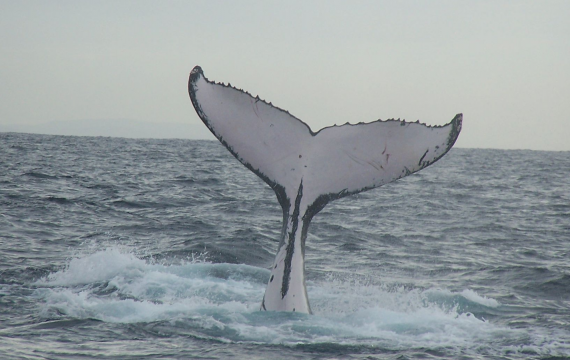 Warning: Mammals Shrink When the Earth Heats Up