The Kinks’ Dave Davies Had UFO and Alien Encounters

Dave Davies is a well-respected man. One of Rolling Stone Magazine’s 100 Greatest Guitarists of All Time, he was the founder, lead guitarist and occasional vocalist for The Kinks, one of the most influential bands of the 60’s British invasion and a member of the Rock and Roll Hall of Fame. Dave Davies has earned his place in music history. Now, like other rock stars, he finally feels comfortable in opening up about his UFO experiences and alien encounters. Could it be that Lola walked like a woman but talked like a man because she was a shape-shifting alien?

In a recent interview with Vulture, Dave Davies talks about a screenplay he’s working on (who isn’t?) about a cop in “futuristic New York” and a “mystic-witch” woman who sings to him from another planet. While it wasn’t directly inspired by an alien experience, Davies admits that he’s seen UFOs.

It was really interesting. I saw them in north Devon in England — lights and zigzags in the skies.

That’s not surprising – Devon is a known hotspot for UFO sightings. But Davies believes that his encounters with UFOs were more than just the usual sightings.

Then when I started to dig deeper into my experience, I understood I was also getting communications — psychic impressions — from aliens.

Davies feels that people like himself who have kept their UFO experiences hidden internally for years get strange feelings from them penetrating their “subconscious and super-conscious.” Over time, he decided to get “really into ufology” and determined that his sightings were related to Sirius, the Dog Star, and that the communications he was receiving originated there.

As with any rock star from the 60’s and 70’s, one wonders if these “communications” may have been the result of the ingestion of certain psychedelic substances. Davies understands, but thinks they’re real and, if they’re not from aliens, they’re from some other beings.

I’m part Irish, and in Irish folktales there are elementals called pookas that communicate with people. There are all sorts of phenomena about consciousness that we can’t quite explain but that give us wisdom and guidance.

Pookas or púcas are shape-shifting creatures from Celtic mythology (Lola?). Fans of the movie Harvey will remember that Jimmy Stewart’s character referred to his invisible rabbit friend as a pooka. Dave admits that he’s a spiritual person and this other-consciousness connection may run in the family – he says he and his brother Ray rarely need to communicate verbally. In fact, he relates a 1982 “out-of-body experience with myself and an inner-body-experience with other intelligences” where the “other intelligences” communicated with him through sense of smell.

While Dave Davies focuses on the spiritual aspects of his UFO and alien experiences, he acknowledges in the interview that he believes the government knows about aliens and covers it up, but he refuses to discuss this or politics any further.

Was Lola an alien? Davies didn’t say, but he hinted that he and Ray have been playing new songs and might possibly release an album … if he gets a sign to do it.

Harvey, are you listening? 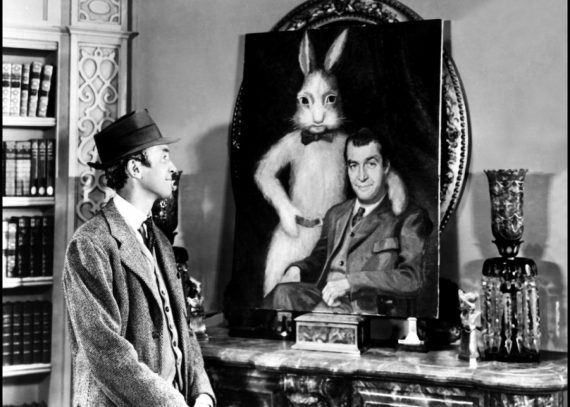