The Problems with Lake Monsters

F.W. "Ted" Holiday was the author of three notable books. We begin with 1968's The Great Orm of Loch Ness. It was followed, in 1973, by The Dragon and the Disc. And, finally, there was The Goblin Universe. The latter was published in 1986, seven years after his death. Holiday had a deep interest in accounts of lake-monsters, and particularly so the creatures of Loch Ness. Holiday wrote other books, too, but the three above are the ones of particular relevance to this article.

Holiday's early work and research at Loch Ness led him to conclude that whatever the creatures were, they were flesh and blood in nature. As the years progressed, however, Holiday's views changed. And they changed radically. Strange synchronicities at Loch Ness, a chilling encounter with a Man in Black, rumors of a dragon-worshiping cult in the area, seances at the loch, and much more had a major effect on Holiday. Indeed, The Great Orm of Loch Ness and The Goblin Universe could not have been further apart, in terms of theories, concepts and ideas. The former was the kind of Cryptozoology championed by Bernard Heuvelmans. The latter was full-on John Keel.

One of the things that led Holiday to change his mind on the nature of lake-monsters was the fact that they were seen in not just huge bodies of water, but in absurdly small ones, too. So, in something not much bigger than a large pool, why couldn't they be caught? Holiday realized there were issues and anomalies that needed to be addressed. He did address them - hence his change of approach to the phenomenon and how to handle it. A perfect example of such an absurdity can be found in a 1968 case from Ireland. Why is it so absurd? Not because of the beast itself, but as a result of the size of the lough. Or, rather, its lack of size. It's approximately 100 yards x 80 yards and roughly 20 feet in depth.

It was on the evening of February 22, 1968 that something very weird occurred at Lough Nahooin. Holiday's chief source was a man named Stephen Coyne, who Holiday interviewed five months after the strange encounter went down. Holiday wrote: "At about seven on the evening of 22 February 1968, Stephen Coyne went down to the bog by the lough to bring up some dry peat. With him he took his eldest son, a boy of eight, and the family dog. Although the sun had set it was still quite light. On reaching the peat-bed beside Nahooin he suddenly noticed a black object in the water. Thinking it was the dog he whistled to it; however, the dog came bounding along the shore from behind. On seeing the object it stopped and started barking."

Holiday continued: "He then saw that the object was an animal with a pole-like head and neck about nine inches to a foot in diameter. It was swimming around in various directions. From time to time it put its head underwater; two humps then came into view. Occasionally, a flat tail appeared. Once this came out near the head which argued length and a high degree of flexibility. The thing was black, slick, and hairless with a texture resembling an eel." 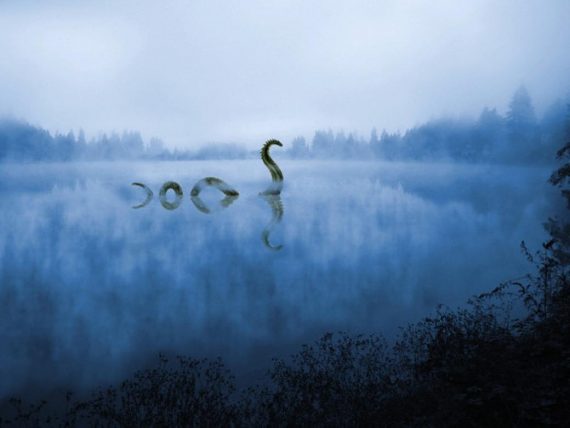 According to what Holiday was told by Coyne, it was specifically the dog's barking that seemed to provoke a response from the monster. In fact, the wide-open-mouthed thing swam directly towards the family pet. When Coyne moved towards the dog, though, the beast immediately swam away. Which may have been very fortunate for the faithful hound! Holiday added: "At about this point the little boy ran home to bring his mother to see the strange beast. When Mrs. Coyne and the children returned the Peiste [which is Irish terminology for a lake-monster] was still busily patrolling the tiny lake."

According to the Coyne family, the unknown animal was around twelve feet in length and, oddly, seemed to have no eyes. Or, at least, none that could be seen. There were, however, a pair of stump-like protrusions sticking out of the head of the monster - something which has been reported in other lake-monster cases, too. According to Holiday: "To and fro before the seven members of the Coyne family strutted the Nahooin dragon. As dusk was setting they finally left it and made their way home over the bog."

So, we have what Holiday believed was a credible family, but who had seen an incredible creature under even more incredible circumstances. When it comes to lake-monsters, it's often said that we lack hard evidence of their existence because of the massive bodies of water in which they deeply dwell and hide. This does make some sense, particularly so when it comes to the likes of Champ of huge Lake Champlain. But, there are so many reports of unknown creatures in very small bodies of water that, arguably, should be easy to snare. But, that never happens. Ever. Of course, the skeptic would likely say that the reason why such creatures are never caught is because all the reports are due to misidentification or hoaxing. That may well be the case in some reports. But, I don't think that tells the full story. And neither did Ted Holiday.

If you want to learn more about what Holiday thought was really going on, I suggest a reading of all three of his books, and in chronological order. The books are not just fascinating for what they tell us. They are also fascinating for the way in which they show how and why, and over just a few years, Holiday came to alter his views on lake-monsters - and alter them significantly so.