UFO Repairmen From The Stars? No!

Last year I wrote an article here at Mysterious Universe titled "UFOs: Extraterrestrial? Probably Not." One of the reasons I gave for suggesting that the UFO phenomenon is far stranger than anything of an E.T. nature, is the fact that many UFO incidents seem to be staged for the benefit of the witness. As if "they" are trying to convince us they are extraterrestrials. But, they are trying way too hard. I made mention of one particular angle of the UFO phenomenon that, in my opinion, is a perfect example. I wrote:

QUOTE: "There's the nature of the entities themselves: they practically overemphasize who, or what, they claim to be. Take, for example, all those 'soil-sampling' aliens of the 1950s and 1960s. You know the ones: someone is working in their field, or driving down a stretch of road, when they encounter a couple of diminutive aliens collecting specimens of local plants, flowers, and vegetables. E.T. on a scientific mission, right? No, not in my view. 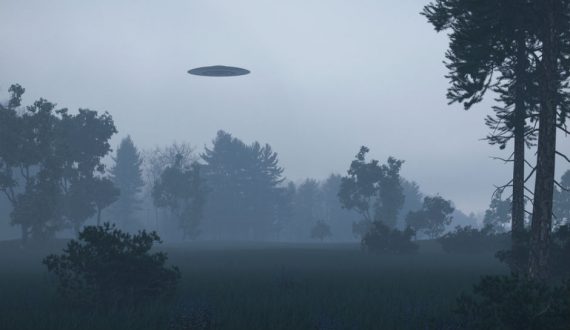 "We only have to take a careful look at such cases (and there are more than a few on record – here’s a link to a number of classic cases) to see that these 'incidents' are clearly stage-managed. It's a game, a scenario that has nothing to do with real soil-sampling, but everything to do with trying to emphasize the ET meme. Are we to believe that, time and time again, aliens are so stupid that they can't collect a few of those aforementioned samples without having their cover blown? Of course, they could easily avoid us! But, here’s the deal: they want to be seen. It's not an accident. It's carefully planned. And it's designed to plant an image of 'E.T. scientists' in the mind(s) of the witness(es)." END OF QUOTE.

Today, I'm going to highlight another - equally absurd - aspect of Ufology. I'm talking about the many reports of people stumbling on aliens "repairing" their craft. Like the supposed extraterrestrials who endlessly take soil samples, "the repairers from beyond" are also spectacularly useless when it comes to the issue of avoiding being seen. Of course, the truth is (as per my words above) that they want to be seen. Yet again, to add weight to the E.T. meme. Let's take a look at a few incidents.

Then, there is this at UFO Evidence, from March 30, 1995: "When a local farmer from Groot Marico in the western Transvaal plains region first observed the saucer-shaped object on Thursday morning, he noticed that it had a distinctly visible hole in its hull. The farmer, Mr. Jan Pienaar (45), is of the opinion that this 'vehicle' landed on a remote country road between Coligny and Brakspruit to have its damaged hull repaired. However, his arrival probably prompted the 'vehicle's' hasty retreat and rapid ascent into the sky."

In 1976, John Brent Musgrave wrote an article for Flying Saucer Review magazine titled "Saskatchewan, 1933: UFO Stops For Repairs." Musgrave said in his article: "During the summer of 1933 stories drifted into Nipawin [Canada] that some homesteaders, as well as a forest tower ranger, had been observing strange lights in the sky and near the ground. Whatever it was, they had been seeing it for the better part of a week." Musgrave added that according to three witnesses to a landed UFO in Nipawin: "The Occupants appeared to be slightly shorter than the average man, and were all dressed in what appeared to be silver colored suits or uniforms. All appeared to be wearing helmets or ski caps, and all were busy running around 'repairing' the craft."

I could go on and on. But, you get the picture. Aliens are so advanced that they can travel the Universe, but when they come here, to Earth, they are endlessly plagued by problems of the "mechanical" kind. And when and where there just happens to be someone around to see them replacing the equivalent of a spark-plug or changing a tire. Nope. Something else is afoot. I don't know why the UFO phenomenon plays such bizarre mind-games with us. But, it does. If we can figure out why, we may be halfway towards figuring out the real nature of the UFO phenomenon.