If Dracula got married in a formal wedding ceremony, he would probably request a funeral march to be played as his bride-to-be walked down the aisle. But what would the song be played on? How about a music synthesizer powered by human blood?

The fact that my body's most important fluid can animate a device designed as an extension of myself beyond my body is also very significant.

At an exhibition in Slovenia called Until I Die, artist Dmitriy Morozov unveiled his blood-powered synthesizer that looks a lot like an 18th century electrical experiment or a set from a horror movie. The blood is all from Morozov – 4.5 liters (9.5 pints) collected over 18 months. After donating the last drop on stage at the exhibit, he diluted it with distilled water and preservatives such as sodium citrate, antibiotics, antifungal agents, glucose, glycerol and other substances to preserve the blood’s chemical composition, color, homogeneity and sterility in order to avoid bacterial contamination. 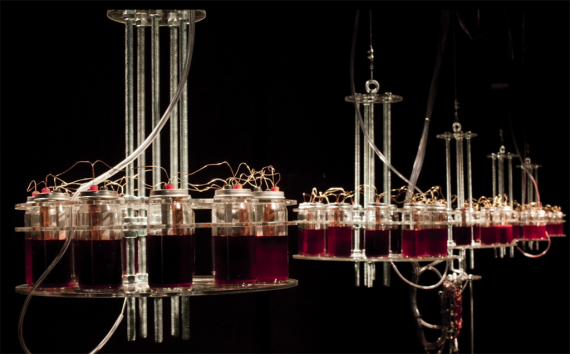 Now measuring 7 liters, Morozov’s blood solution was poured into canisters in five direct current batteries. Together, the batteries generated three volts of electricity that traveled though the main battery device to the small electronic algorithmic synthesizer module that created sounds heard on a small speaker. The batteries had enough blood power for eight hours of corpuscle concertos.

OK, it’s not Rick Wakeman or Keith Emerson but it’s still a blood-powered synthesizer that would look great onstage with your favorite goth metal band. Morozov admits his purpose was more mystical than technical.

(This was) not an attempt to create advanced technology. It was a symbolic act, representing the ephemeral nature of existence, much like a Buddhist monk may create a colorful mandala of sand, only to destroy it soon after. 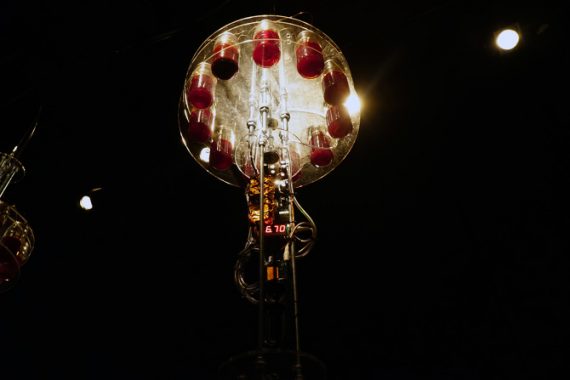 Actually, the electrical powers of human blood have already been proven by others. In 2007, scientists at Rensselaer Polytechnic Institute created “bio-batteries” that ran on blood, urine or tears. In 2009, researchers at the University of British Columbia in Vancouver built a fuel cell that generated power from human blood plasma as a way to replace batteries in devices like pacemakers.

As always, kids, don’t try this at home. Leave this type of strange (and probably illegal in some U.S. states) blood battery to artists and Silicon Valley billionaires looking for ways to turn young blood into immortality.