Virtual Lemonade is Coming Soon to a Stand Near You

How much do you pay for a glass of fresh-squeezed lemonade? How much would you pay to send a digital copy of that lemonade across the world to a friend who could drink an identical glass with you? The answer and the digital lemonade may be here soon. Researchers in Singapore have developed and tested this preliminary version of a Star Trek replicator and, while the end result wouldn’t fool Mr. Spock, many who tried it were impressed.

People are always posting pictures of drinks on social media – what if you could upload the taste as well? That’s the ultimate goal.

Nimesha Ranasinghe, a Research Fellow at the National University of Singapore, decided to use his expertise in digital multisensory interactions (including taste and smell) and his experience in developing a digital lollipop (which electrically stimulates the tongue to imitate candy flavors) to create digital lemonade and send it over the Internet using a new methodology he calls Taste Over IP (Taste/IP).

The process begins at the lemonade end with an RGB color sensor to digitize the drink’s color and a pH sensor to record its acidity. The data is sent via Taste/IP to a remote processor which uses it to correctly tune a set of LED lights in a special drinking glass to replicate the lemonade’s color and to program an electrode on the lip of the glass to imitate the lemonade’s tart taste. The glass itself contains only water.

This seems like a lot of work, but what if it’s the best glass of lemonade ever and your friend is trapped in a hot, lemonless desert with a thirst that water just won’t quench? Would this digital lemonade do the trick?

Thirteen volunteers were recruited to drink glasses of real and digital lemonade. The colors were varied – yellow, cloudy white and green (eww!). All test subjects were trained to drink with their tongues on the rim of the glass where they may or may not be getting the digital taste bud stimulations. They rated the drinks on how sour they looked and how sour they tasted. What did they think? Did they pucker or puke? 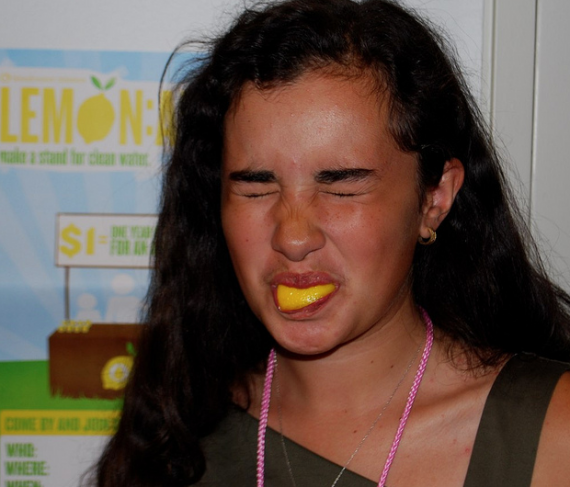 Ranasinghe and his team presented the results at the recent Conference on Tangible, Embedded and Embodied Interaction in Yokohama, Japan. The subjects rated the real lemonade with the yellow color more sour than its digital counterpart but the digitized version of the cloudy white stuff won over the real thing. It appears no one liked either of the greens.

You may have noticed that the subjects were not asked to rate sweetness. That simulation hasn’t been developed yet, nor has the smell, which is a key component of taste. Ranasinghe asks for patience.

We’re working on a full virtual cocktail with smell, taste and color all covered. We want to be able to create any drink.

Did he say cocktail?

Physicist Warns Aliens are Here and Plan to Quarantine Earth