Former President George W. Bush appeared on Jimmy Kimmel Live! this week and the host, just as he did with both Clintons and with former President Obama, asked:

When you were in office, did you go through the secret files – the UFO documents?

According to a new poll released coincidentally on the same day as the interview, 55 percent of Americans believe the government would try to keep it secret if there was any contact with an alien species. Even though, as Kimmel pointed out, Bush is no longer part of the government, the former president answered yes when asked, “are there really great secrets that you know that you can't share with people?”

While he won’t talk about it, W. definitely knows some things about UFOs. On the morning of November 3rd, 2003, radar picked up a UFO in restricted space around the White House. Two fighter jets were called to the area but no craft was found. On the morning of April 27, 2005, another UFO was spotted heading from Reagan National Airport towards the White House at up to 120 miles per hour. The president was rushed into the protective underground bunker and three helicopters (one military and two police) came to the location but no craft was seen.

Then there was the UFO at the president’s ranch in Texas. On January 8, 2006, numerous sources reported that over a dozen people saw a 300 meter (985 foot – although some said “mile-long”) silent UFO with bright lights that was flying low over Stephenville towards the president’s ranch in Crawford … followed by USAF jets. The president was not at the ranch at that time. Some witnesses said it stopped and hovered. MUFON noted that the object was seen on radar but the reports were heavily redacted. The military at first denied the reports, then admitted that an “error was made regarding the reported training activity of military aircraft” and that “10 F-16s from the 457th Fighter Squadron were performing training operations in the Brownwood Military Operating Area.” 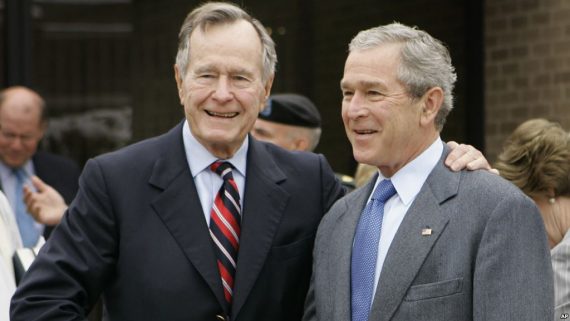 Would President George W. Bush know more than these scant details about these (and other) incidents? Of course he would. He was constantly in competition with his father, the former president and former CIA director George H. W. Bush, and would have wanted to top his dad in this area as well. While CIA director, George H. W. Bush turned down requests from incoming President Jimmy Carter for UFO information, even though he later admitted, “I know some. I know a fair amount.” Did he later turn down requests from a president from his own party? A president with the same name? Is blood thicker than party affiliation? UFO disclosure?

While there have been UFO sightings around Washington and around the presidents during other administrations, including the current one, reports during the single term of George H.W. Bush are scant. Did they suddenly disappear or did Bush keep them tightly top secret, as he later bragged, “I am very careful in public life about dealing with classified information.”? In either case, the younger Bush was a constant presence in that administration, the Reagan administration when his father was VP and the CIA year. He was also a former pilot who would have had an interest in UFOs and a rogue competitive son who used his father’s past and current positions to his advantage.

George W. Bush laughed when Jimmy Kimmel asked him about UFOs. Then again, he was known to laugh about most subjects.

George W. Bush was exposed to UFO incidents and information more than any other president, through three administrations and a CIA directorship.