February 14, 1945 was the date of a still-unresolved murder in rural England. It was a killing which bore all the hallmarks of death at the hands of a clandestine group of occultists. Some suggested a band of witches were the culprits. Others suspected a secret sect of druids. The victim was a farm-worker, 74-year-old Charles Walton. He was found dead with nothing less than a pitchfork sticking out of his chest. He was a resident of a small, picturesque village in Warwickshire, England called Lower Quinton. Walton had lived in the village all his life, in a pleasant old cottage that stood across from the local church. It was a scene not unlike what one might expect to see on Downton Abbey or in the pages of a Jane Austen novel. Until, that is, murder, mayhem, and, maybe, a secret cult came to Lower Quinton.

Walton was known to all of the locals. He was an affable but quiet sort, and – somewhat intriguingly – was said to have possessed the ability to entice wild birds to eat seeds from his hands. He was also said to have the power to reduce a wild, aggressive dog to a man’s best friend simply by speaking to it. On top of that, he had expert knowledge of local folklore and legend. Rumors suggest that perhaps Walton’s slightly uncanny "powers" had ensured him a place in a secret witchcraft cult, one which he ultimately fell out of favor with, and, as a result, paid the ultimate price. Namely, his life. 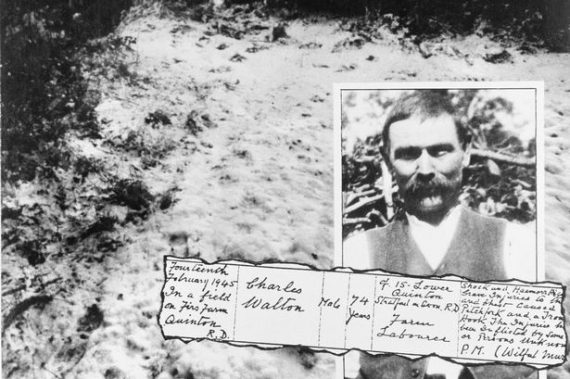 What is known for sure is that on the day in question – Valentine’s Day, no less – Walton was busily trimming hedges on what was known as Hillground: a large field at the foot of Meon Hill. His tools were a hook and a pitchfork. It was while working on the hedges that someone stealthily intervened and took Walton’s life – and in savage fashion. When his body was stumbled on by a shocked local, all hell broke loose in the small village. Walton was lying dead on the grass, with the pitchfork pinning him to the ground, and the hook having pierced his throat in savage and violent fashion. On top of that, a large cross had been cut into his chest.

It should be noted that Meon Hill has, for centuries, been associated with supernatural activity: sightings of blazing-eyed black dogs – not unlike the terrible beast in Sir Arthur Conan Doyle’s The Hound of the Baskervilles – have been reported. Satan himself is said to have kicked a large rock from the top of the hill to the bottom of it, with the intention of flattening Evesham Abbey.

Such was the strange and sinister nature of Walton’s death, the investigation wasn’t just left in the hands of the local "bobbies." None other than a Scotland Yard detective got on the case: Detective Inspector Robert Fabian. Despite an extensive investigation, and suspicions that the guilty party was a man named Albert Potter – who was employing Walton on the day he met his grisly end - the matter was never resolved to the satisfaction of the police and the mystery remained precisely that: a mystery.

It’s worth noting, in closing, that Detective Inspector Fabian later said the following of his investigation: "One of my most memorable murder cases was at the village of Lower Quinton, near the stone Druid circle of the Whispering Knights. There a man had been killed by a reproduction of a Druidical ceremony on St. Valentine’s Eve."

D.I. Fabian also offered the following, memorable words: "I advise anybody who is tempted at any time to venture into Black Magic, witchcraft, Shamanism – call it what you will – to remember Charles Walton and to think of his death, which was clearly the ghastly climax of a pagan rite...It is prudence on which your future peace of mind and even your life could depend."

Perhaps the case was indeed steeped in matters relative to witchcraft and human sacrifice. On the other hand, a case can be made against the aforementioned Albert Potter. Of course, the Potter angle is far less championed than the occult angle. Why? Because it's not as intriguing, sensational, or mystery-filled. Whatever the truth, it's still an affair that, locally, has not been forgotten.