At one time, there had been a general consensus within the archaeological community that humans had arrived in North America no sooner than the end of the last ice age.

Aleš Hrdlička, first curator of physical anthropology at The Smithsonian Institute and founder of The American Journal of Physical Anthropology, had suspected Indians made the journey into the Americas only within the last 3000 years; he even went so far as to say that, rather than the widely accepted "out of Africa theory", that the cradle of human origins had been European instead.

With the eventual discoveries at Folsom, New Mexico, and subsequent excavations there in the 1920s, conclusive proof of ice age man in the Americas became a scientific reality. By 1943, Hrdlička, it is believed, had gone to his grave in opposition to the reality of such finds, favoring instead the obsolete notion that human settlement in the Americas had been far more recent.

With subsequent discoveries, similar "paradigm shifts" would only continue. Excavations at Blackwater Draw near Portales, south of Clovis, New Mexico, pushed the lineage of human migrations back even further, with the acknowledgement of the thusly-named Clovis culture. With time, further discoveries at locations like Meadocroft Rock Shelter, as well as South American sites like Monte Verde, Chile, rewrote the "Clovis First" paradigm, with estimates of human settlement in the Americas going as far back as 24,000 years.

That is, unless recent discoveries in southern California don't push back the timeline even further... by perhaps as much as 100,000 years more than previously thought.

Recent excavations in San Diego County, California, unearthed not only the remains of an extinct mastodon, but also a number of fossil finds which appear to have possessed indentations which, according to one group of researchers, could be indicative of human activity. Specifically, the markings found on the fossil tusks and bones of the mastodon appear to match accordingly with artifacts found in the vicinity that included hammerstones and a number of other lithic tools. 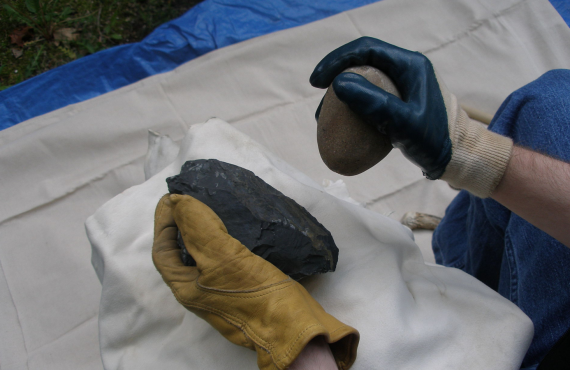 The site, described as a "deeply buried" location by IFLScience, featured no actual human remains (which is not uncommon during such excavations, where the more durable stone tools remain the least perishable evidences of human presence). The excavation is detailed in a recent Nature article, titled "A 130,000-year-old archaeological site in southern California, USA." According to the study's authors, indentations and markings similar to those found on the mastodon remains could be recreated using stone tools like those recovered from the San Diego County site.

Needless to say, the call for caution here seems apparent: indeed, the claims being made about this site would certainly qualify for being "extraordinary", and hence, whatever the evidence may suggest, perhaps the best course of action would be one of at least moderate skepticism. Although the "Clovis First" paradigm is one that, with multiple different sources of evidence to the contrary, began to slowly fade away, pushing the timeframe for human occupation all the way back to 130,000 years ago is quite a stretch. It may be accurate, for all we know; still, we must be cautious as we consider data such as this.

Sensational and even "earth-shattering" as the discovery appears to be (and has been made out to be in much of the media coverage following the study's publication), the lead researchers themselves remain cautious, though still acknowledging the legitimacy of their discovery. According to the paper's co-author Steven Holen, “I expect there will be some extraordinary claims about how [the evidence] got there. We expect criticism, and we are ready for it. I was skeptical when I first looked at it myself, but it’s definitely an archaeological site." Holen, along with co-author of the Nature paper, is the Co-Director of the Center for American Paleolithic Research.

Dubbed the "Cerutti Mastodon site", the study's authors state that they believe it to be the oldest of its kind in America. "The CM site is, to our knowledge, the oldest in situ, well-documented archaeological site in North America," they wrote, "and, as such, substantially revises the timing of arrival of Homo into the Americas."

Similar discoveries nearby, which include the controversial Calico Hill site, have previously suggested an ancient presence of humans in the region in question. However, due to the apparent impossibility of humans in North America at such an early time (as well as less-than-convincing representations of lithic technologies recovered from the site), the location has long drawn criticism, which is not unwarranted. As noted by skeptical writer Donald Prothero, "the 'Calico Early Man' site is a running joke which became a blemish on the career of the famous anthropologist Louis Leakey—yet the loyal amateur acolytes still promote it."

Understandably, the Calico site and its contents remain controversial and, by the standards of many in the archaeological community, perhaps entirely disputable. Still, it may eventually come to pass that new emerging evidence--perhaps the likes of which were recovered at the Cerutti Mastodon site in San Diego County--will do a better job than Calico Hill has done, in terms of lending credence to the idea of an earlier human presence in the Americas.

However, the new discoveries at the Cerutti site will have to withstand the test of critical analysis... plenty of which is already emerging. Donald Grayson of the University of Washington, in an article featured at BuzzFeed, seemed unimpressed, to say the least. "I have read the paper and I was astonished by it," he said. "I was astonished not because it is so good, but because it is so bad." Grayson, and other cautious members of the archaeological community, argue that the fossil samples may have been defaced and damaged by bulldozers in the 1990s, as highways were being built in the area around the Cerutti site.

When we consider the varieties of opinions that have emerged over time, especially in relation to human migrations into North America, and what science has had to say about the subject, the most consistent feature along the way has been the need for changes in opinion over time. The ever-evolving narrative on early humans in the Americas has been long, and complex; here again, perhaps information gleaned from the Cerutti Mastodon site will help shape future ideas about the presence of humans in the prehistory of the Americas.

Then again, maybe this is all a mis-reading of the ancient evidence before us; if a new understanding of our past is going to emerge, we will first require better evidence--and more of it--for only a "rock-solid" argument (lithically speaking) will prevail.