Just in time for the announcement of the discovery of a softball-sized venomous cave spider in Mexico comes word that a cure for arachnophobia – the fear of spiders (but hopefully not articles about them) -- may have been found. To help arachnophobes make it to the spider discovery, let’s cover that first.

In the latest Journal of Anxiety Disorders, University of Manchester psychologist Dr. Warren Mansell unveiled his new cure for arachnophobia using Perceptual Control Theory instead of the less effective technique of facing your fear used by most psychologists and arachnophobes who can’t find a rolled-up magazine.

Dr. Mansell put 96 test subjects with severe arachnophobia in front of a video screen where they could control how close or far away a spider would appear. This simple exercise taught them how to control the perception of how close or far away a real spider might be and gave them the ability to physically move away from spiders or avoid the places where they were likely to encounter them. By making choices that allowed them to control the perception and their real physical proximity, Dr. Mansell says most of the subjects were able to successfully address their fear of spiders within two weeks.

Perceptual Control Theory predicts that it is vital for a client to have control over their experience of important elements of the environment like the sources of threat, because control itself is pivotal for health and well-being.

Let’s try it. Slowly move yourself away from whatever you’re reading this article on. Feel better? Good, because now we’re going to talk about the Califorctenus cacachilensis – a saucer-sized venomous spider named for the Sierra Cacachilas mountain range on the Baja California peninsula where the first ones were found by San Diego Natural History Museum researchers Michael Wall and Jim Berrian. 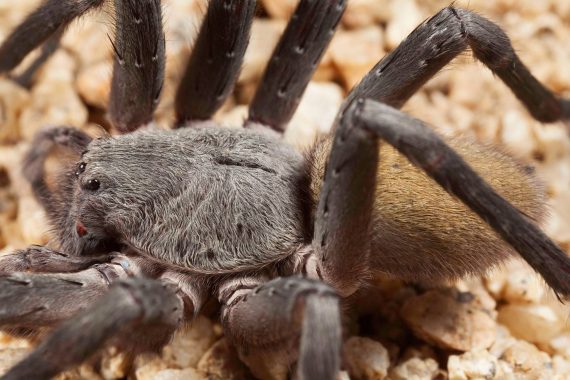 In 2013, Berrian found shed exoskeletons of the species in a grotto. He and Wall then discovered a live specimen in a nearby cave, another in an abandoned mine shaft and more in the pit of an old outhouse – you’ve got to admire researchers who dive into old outhouse pits for science. Neither they nor locals could identify the giants spiders so they brought eight of them back to their lab where Mexican entomologist Maria Jimenez identified them as a new species of wandering spiders. The most famous family member is the Brazilian wandering spider, which uses its hairy pincers to deliver a venom that can kill a human at worst or give a man a four hour erection at best (seriously, although not a smart thing to do before a date). Berrian says he was bitten by a Cacachilensis and the pain, which was less than a bee sting, went away after a few hours (and didn't cause an erection). 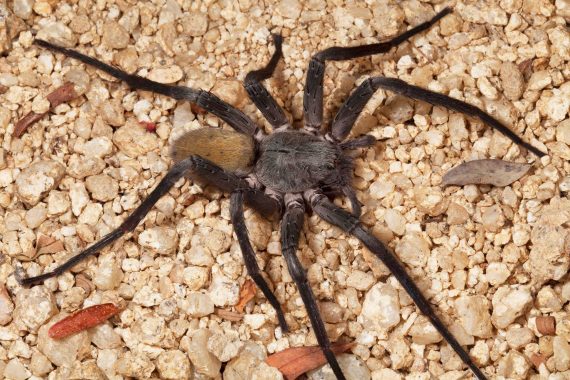 According to their report in Zootaxa, the Cacachilensis has a yellow abdomen and coffee brown legs that can be up to 4 inches long – intimidating but nothing close to the one-foot-long legs of the giant huntsman spider of Laos. Also, the range of the Cacachilensis is pretty much limited to the caves, mines and outhouses of the Sierra Cacachilas mountains, so just imagine them being pretty far away and you’ll be fine.

However, it might be wise to take a rolled-up magazine for psychological comfort (and paper) if you’re using an outhouse.