Hubble Sees Something Huge Coming Out of Uranus

Stop your giggling over there! That’s what the press release said … kind of. NASA scientists studying the gas giant (yes, that’s what it is) with the Hubble telescope have been watching bursts of wind (this is just getting worse – it’s solar wind) as they hit Uranus (you can’t make this stuff up) and saw that the wind caused huge intense auroras to come out of Uranus and then circle Uranus (really!). When they finally stopped laughing, they also reported finding the magnetic poles that disappeared into Uranus in 1986. This is what happens when private space companies takeover the launches and NASA scientists have to find new ways to entertain themselves.

Seriously (if that’s possible at this point), this is part of an ongoing study of auroras on other planets. As on Earth, these spectacular light shows on other planets are caused by charged particles from solar wind or cosmic rays that get caught by a planet’s ionosphere and magnetic field and collide with gas particles to create bursts of light that are witnessed by the planet’s inhabitants and/or astronomers on Earth.

That old space workhorse Voyager 2 snapped the first pictures of Uranus on its flyby in 1986. Since then, NASA has had to rely on Earth-based telescopes. In 2011, the Hubble telescope was first used to photograph Uranus. After the Space Telescope Imaging Spectrograph (STIS) installed on Hubble was repaired and put back into service, ultraviolet pictures were taken in 2012 and 2014. The times were coordinated with two massive bursts of solar wind that were tracked to Uranus and caused the equally massive auroras.

The astronomers pulled their eyes away from the auroras long enough to relocate Uranus’ magnetic poles which had been lost shortly after being discovered by Voyager 2. Being the big ball of bluish gas that it is, coupled with its distance from Earth, there were no features on the planet that could be used as points of reference to find the poles again. While the pictures don’t show the poles, NASA is now confident of their coordinates.

The images of the auroras of Uranus released this week are a combination of the old and the new. The picture of the planet’s orbiting disk is from the Voyager 2 shots while the aurora is from the Hubble pictures. Together they provide beautiful photographs of a planet that gets too much abuse for the mispronounced name it didn’t choose for itself.

Oh, go ahead and giggle …NASA started it. 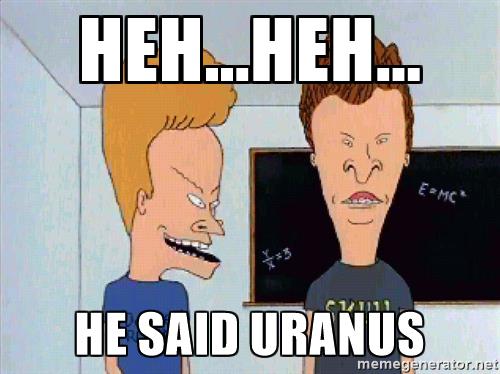 An ‘Alien’ World May Lie Miles Beneath the Mariana Trench